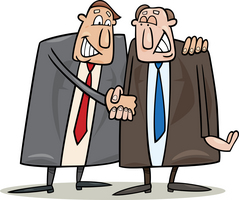 It used to be that a man’s word was the primary definition of his character. If you didn’t keep your word how could you be trusted with anything else? A man’s word was his word. But it seems that somehow this idea has been lost in America or at least in the Republican party.

When the super-committee, one of whose members is the current GOP vice-presidential candidate, was formed everyone in congress gave their word that if they could not reach a compromise on how to reign in the deficit then all of discretionary spending budgets would take a 10% hit. Every member of congress put his word on the line by passing this compromise resolution.

Now it seems that almost all Republicans and even some Democrats want to renege  on that promise and go back on their word. They say that our military can’t possibly take a 10% cut without threatening our security. Of course if you have read much of anything on the blog you know I think that is hogwash. We, five percent of the world’s population, currently spend more on our war machine than the rest of the world combined. If we only quit being the policemen of the world and left part of that task to the people of the affected region then we could reduce our military budgets by many more times that the ten percent promise.

So here we are with a building full of the people’s representatives who can not be trusted. What should we do about this situation? In my mind we should remove all those who can’t be trusted to keep their word. If you agree then watch in the coming months how your representatives in congress address this issue. If they go against their word then toss them out. We can only bring back integrity to our political institutions when we can trust our representatives and yes they should answer to us and not their political leadership. They speak for us while they are in Washington.