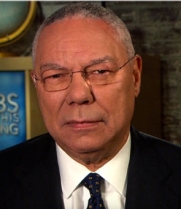 When he took over the country was in very, very difficult straits. We were in the one of the worst recessions we had seen in recent times, close to a depression. The fiscal system was collapsing. Wall Street was in chaos, we had 800,000 jobs lost in that first month of the Obama Administration and unemployment peaked at 10 percent. So we were in real trouble. The auto industry was collapsing, the housing was started to collapse and we were in very difficult straits. And I saw over the next several years stabilization come back in the financial community, housing is now starting to come back after four years, it’s starting to pick up. Consumer confidence is rising.”

And, despite his endorsement of a Democratic candidate in two presidential elections, Powell says he remains a Republican. “I think I’m a Republican of a more moderate mold,” he said before adding, “That’s something of a dying breed I’m sorry to say.”

I am hoping that after President Obama is re-elected that more moderate Republicans like Colin Powell seek to take back control of their party.