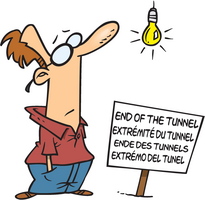 We got one thing to be thankful for anyhow. The country is not in as bad shape as the rumors have it. 3 September 1931  Will Rogers

One of the things I have always liked about Will is that he seemed to be an eternal optimist. This quote was about three years into the Great Depression and he was still an optimist. But it does go to the heart of another of my favorite quotes and that is things are never as good as you had hoped or as bad as you had imagined.

There are so many rumors around about what will happen if we go over the so-called fiscal cliff. I think I am aligned with Warren Buffet on that. Here is what he says about that:

Buffett told CNN “We are not going to permanently cripple ourselves just because 535 people can’t get along.” Buffett also says he believes the economy would be fine even if income and capital gains taxes were significantly higher than they are now.

I am a Warren Buffet fan. I know he fell out of favor in the mid-90s because he didn’t gobble up all those sky-rocketing internet stock. He was called an old fuddy-duddy by many. But then the internet bubble burst and it seemed that everyone but Mr. Buffet lost their shirts. Maybe Mr. Buffet is an old ruddy-duddy; but he is a rich old ruddy-duddy!

Its nice to know that I am in good company concerning the “fiscal  cliff”. Let it happen and then ameliorate the consequences with new legislation. As Mr. Buffet says since 535 people just can’t seem to get along so just letting it happen is probably the best solution. This story is still being played out but right now I am willing to bet that gridlock will again be the result. If it is then I hope some of those people on Wall Street need to listen to my buddies Warren  and Will and not panic.