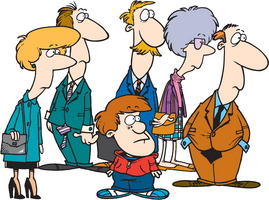 The “Radical Right” and the “Liberal Left” are so twentieth century!  Its time we invented some new monikers for these two opposing groups and I have the perfect names. These names just seem to be more descriptive than the old one.  Who knows what “Right” and “Left” really mean anyway.  For some reason I know I am right-handed but I am also called left leaning. I know we in the U.S. read from left to right but some countries read from right to left and some read up and down.  Left and right just don’t have any solid meaning.

So, I am going to invent some new names here and I expect them to be in common use by the end of 2013. 😉

There are two basic world views in place in the country. The first are the “Makers/Takers”. Mr. Romney and Mr. Ryan, who were the “leaders” of the Republican party were of this variety. Mr. Romney had it all figured out that 47% of us were “takers”. I won’t go into all the details about that as I have sworn off that rhetoric for now.  Mr. Ryan being a big fan of Ayn Rand also believed in the maker/taker philosophy. I know these two guys were kind of like a “flash in the pan” as far as leaders go but I’m pretty sure many of the current old-time leaders in the GOP are also part of that crowd.  I can’t yet say about this new crop from the GOP that started the day after the election is in the same boat but I imagine that some of them will prove to be.

The second classification is the “Brother’s Keepers”. These guys want to give the shirt off their backs to anyone who asks for it. Well, not really, but they do want to make sure that we have a strong public safety net to catch anyone who falls on hard times.  The trouble is they can’t seem to see when someone is taking advantage of them.  This fact drives the makers/takers up the wall!!!  The Brother’s Keepers seem naive in that regard. Of course the term “brother’s keepers” comes from Jesus Christ as found in the Bible so you would expect most Christians to be in this group too. I think many are but there is also a group who call themselves “conservative fundamentalists” who don’t seem to think that anyone should get something they haven’t earned. (That seems strange coming from a Christian but it seems to be the case). Most of those guys will just have to be included in the maker/taker group. They definitely don’t fit in this one.

And as usual in between is a huge pools of those who for one reason or another just don’t care. They are just too busy with their day-to-day lives and don’t have the time to think about anyone else. It’s not that they are particularly selfish but it is more of a survival thing to them. Another substantial part of this vast “other” pool are those who just don’t care. Lets face it, apathy reigns in this country. We fight our political battles to try to nudge some of the apathetic crowd to our camp. That is how elections are won now.  All of the ads we suffered through in the last political season were to try to get a few critical votes from this small bunch.

Makers/takers and Brother’s Keepers have a nice ring to it. I will leave it up to those high paid Madison Avenue people to decide what color each group is and who their mascots might be. I think I have done enough for today. See you tomorrow….