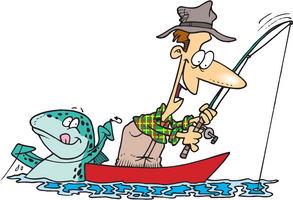 “If all politicians fished instead of speaking publicly we would be at peace with the world.” – Will Rogers, 20 October 1933

Maybe that is the solution for our current gridlock in Washington.  Just shut it down and go fishing. But remember to turn off the money spigot before they leave.   There is a lot of hot air in that area of Virginia that needs to be blown out to sea.

In my younger bachelor days I had a fifteen foot bass boat that I took around the country. I really wasn’t much of a fisherman but I guess I caught my share. It was more about being out there on the lake than anything else.  Being that close to nature and its corresponding serenity was what it was all about. Everything else just tended to melt away during those hours.

If those yahoos in Washington need anything it is to wash away all the bitterness and spite that has enveloped that city. They need to chill out and discover that “it” is not always about them and their re-election campaigns. They need to understand that the billions of bucks that they hand out daily is not theirs but belongs to those who elected them.  They were sent there to do the people’s business to accomplish the greater good and to provide for the general welfare of the whole country. In other words they need to learn how to be the statesmen that their predecessors were.

Another saying that was popular from Will is that the best thing congress could do for the people is to take a two-week vacation. But, given the circumstance I’m sure two-weeks is not enough. Hell, I’m not even sure two years is long enough.