It is interesting to see another country where the majority thinks religion does more harm than good, especially since this one is our neighbor. I’m not sure what the statistics in Europe are but I suspect that they are similar to Canada’s.

More than half of Canadians believe religion causes more harm than good, a new poll has found. The survey by Ipsos found the proportion of people who held the belief had increased in recent years, from 44 per cent in 2011 to 51 per cent this year. Less than a quarter of people, or 24 per cent, believed that religious people made better citizens, down eight points from 2011, Global News reported.

Source: Majority of Canadians think religion does more harm than good | The Independent 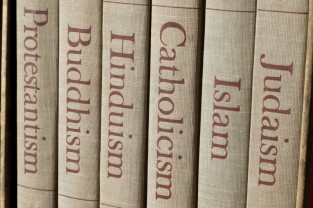 I have been brave enough to openly hold this position for about a dozen years now but was kind of surprised that so many believe as I do.  Before you start flaming I want to explain my feelings.  It is not that we shouldn’t be praising God for everything he created but instead about the versions of religion that have sprung up over the centuries trying to do that.

If you are a history enthusiast it is hard not to come to the conclusion that religion does more harm than good.  We see so many wars started around one person’s view of God vs another’s.  By far the majority of religions believe that their vision of God is the only true one. That belief is the foundation for the Sunni vs Shiite, Protestant vs Catholic, Lutherans vs Baptists (I could go on and on..) and even inside the splits within a particular belief.  Personally I know that WELS Lutherans think that ELSA Lutherans are just plain ungodly.

I have come to believe in what I call the Woody Guthrie view of religions and that is that we are ALL just part of one big soul. We are all searching for God and far too many of us just refuse to believe that it is that simple…

We are all in this together

5 thoughts on “Religion Does More Harm Than Good..”

Send Me A Private Message VIA Email