Socialized medicine seems to be dirty words for many of my RedAmerica friends. To them, it and communism are one and the same thing. That couldn’t be further from the truth. Since there seems to be nothing in this world that isn’t a simple black or white to them, I’m not sure they will ever accept any other definition but that doesn’t stop me from trying to show you how the rest of us should see socialized medicine.

The purpose of this post is to tell you a little about other country’s versions of medical care so that you can decide whether they are evil or maybe that is a prejudice that some need to overcome.

To begin with, it’s worth pointing out that the single-payer system is hardly a step towards “socialism,” as Mr. Graham claims. The United Kingdom, Canada and Germany — all countries with different forms of universal health care — are safe bastions of capitalism. 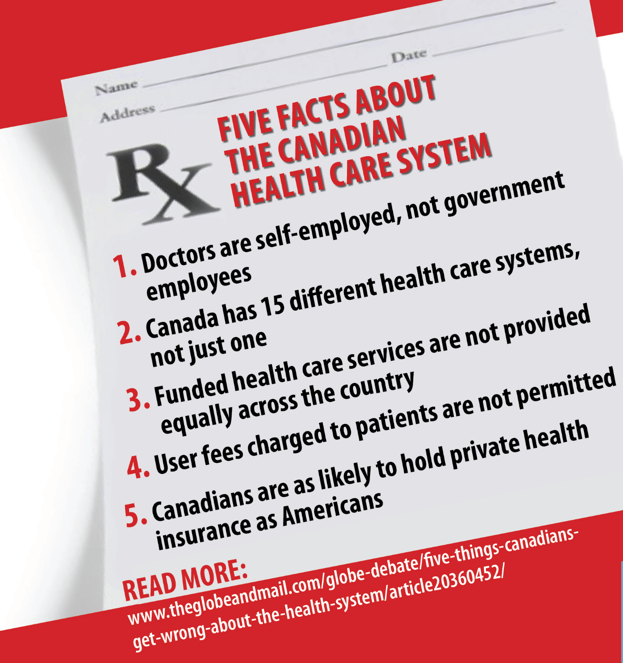 Secondly, the U.S. has the most inefficient medical system in the world, based on health care spending and outcomes. America spends much more on healthcare per capita than any other nation in the world and gets less health for it.

The differences are not trivial at all. The median per capita spending on health care in wealthy countries is $4,700 per year, according to research by the Organisation for Economic Co-operation and Development. (That means that half of the countries spent more than that and half spent less). For instance, Canada‘s spending was just at the level of the median. In contrast, the U.S. spent more than twice as much, at $9,900 for every man, woman and child.If we had Canada’s system we could save no less than $13,600 per average household. That adds up to a walloping $1.7 trillion dollars for the U.S., about as much as last year‘s after-tax profits of all U.S. corporations combined.

It is a well-known truth that our medical system is the most expensive in the world and only mediocre when it comes to results. So, why don’t we look at what the rest of the world does to make their’s less expensive and more effective? There is a myriad of examples of how it can be done better. But to my RedAmerica friends, they are all socialism in sheep’s clothing and to be avoided at all costs.  But, what my RedAmerica friends don’t seem to understand is that almost half of us are already in socialized medicine plans.

Medicare, Medicaid, and veteran’s benefits are all systems that are run by our government and in most cases more efficiently than the private sector alternatives. And if our RedAmerica congress would just allow it, they could see even lower costs more by using their size to bargain down the cost of our prescription drugs.  It really wouldn’t take that much to move the rest of the country to this system and finally get a hold of our ever spiraling medical expenses.

I truly believe that someday we will go this route, but right now I just don’t know what it will take for RedAmerica to swallow this very effective pill??