I’m pretty sure you are expecting a different answer to the title above than what I will give you. But that is nothing unusual here at RJsCorner is it? 😎

END_OF_DOCUMENT_TOKEN_TO_BE_REPLACED

I am writing this on the first day of my 74th year and as I do every year, I am philosophically looking back to where I have come from and looking forward to making my final years the best they can be. That is what this post is going to be about.

END_OF_DOCUMENT_TOKEN_TO_BE_REPLACED

One of the goals of RJsCorner it to maybe teach the younger generations some lessons so they don’t have to make the same mistakes I did. If maybe one of my over 3,000 posts has helped one person in that regard then all my efforts here were worth it.

With that in mind, I am going to start a series here on some of the life lessons I have learned in my seven decades on this earth. It would have been nice to have been forewarned about some of them but I really had no one to teach me these lessons.  I hope that by putting them here I, in a small way counter that.

The big problem with many of us is that we just don’t know any better when it comes to life’s decisions. Unfortunately, the primary way we learn is by our mistakes and that is a rough way to go through life.  Enough of the lead-up, let’s get to the topic at hand.

First a personal story. I know the title is a little crude but isn’t so much lately. I was pretty fortunate that for the most part, I worked for some pretty good people.  But, there were some who simply made my life more difficult than it needed to be. One, in particular, promised me that I would be part of a team to write the code for a new telephone answering system but it ended up a team of one doing the work of three.  I went into his office almost weekly to find out when the rest of the team would come on board.  Long story short, it never happened and I ended up working 80 hour weeks over a five-month period to try to do it myself.  When I failed to meet the project deadline I was given a low rating and no pay increase for the year.  I simply don’t know why I let this guy off the hook so many times. I should have spoken up, but I didn’t.

But there was a shining end to this particular episode in my life.  After my low job performance review, I quickly asked for a transfer to another organization.  I ended up moving from engineering to an information technology area and discovered that was my perfect job. A year after my “no raise” I got a perfect rating score and the biggest raise I got during my thirty years of service.  So, in reality, I am thankful that my previous boss was an asshole. Now onto less personal examples.

I am now a car guy. That is I enjoy watching shows about building are repairing cars. The Velocity channel on satellite is the primary source for this venue. Several of those shows, particularly American Hot Rod and Graveyard Carz who were run by assholes. These guys constantly berate their employees and blame them for mistakes that they themselves made.  Life is just too short to have to spend each day with someone who doesn’t respect your contributions.

Abusive bosses are becoming quite a topic lately, especially the sexually abusive ones. It seems that every day lately another abuser is outed.  Life is just too short to work for one of these guys or gals.  If you run across one in your life just keep on moving. It is a simple as that.  The way to make that possible it to keep yourself up on the talents needed to do the work you have chosen.  That way there is always another place to join. 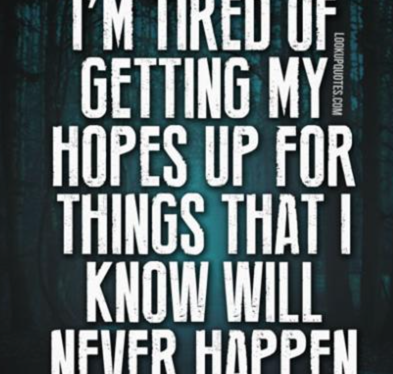 I truly believe that I am an optimist at heart but being one is down right depressing at times, especially these times.  I have been thinking a lot about this lately and I have come to the conclusion that looking back ony seven plus decades on this earth can maybe be summed up by one word.

I know at first thought that is kind of sad commentary on any life, but let me explain my version of disappointment.  All my life I have had high hopes. I always want everything to turn out the best it can be. As a result people, including myself, often disappoint me to one degree or another.  As a young boy I looked up to my father as the epitome of what a good person should be. Then one day I saw him do something that shredded that image. That might have been my first disappointment but it certainly would not be my last. Many many others would follow. One of my primary life lessons in this regard is that things are never as good as you hope nor as bad as you dread. Sometimes that helps ameliorate the situation but…

In the end it just comes down to the fact that I expect too much from others and even myself.  I think that is because of my optimistic nature and that is something I proudly cling to.  Getting my hopes up does often result in disappointment but sometimes it results in joy and celebration.  I would rather have that than to go through life expecting nothing from anyone or anything in order to avoid disappointment.  Now, that would be a depressing way to spend my time, especially what I have left of it.  The celebration of the successes in life far outweigh the disappointments even if disappointment comes more frequently.  It is as simple as that for me.