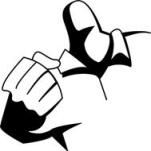 I was eight years old when I gave my best friend a black eye over some dispute that I can’t even remember. Immediately after that incident I was totally devastated over the violence I had done. I promised myself that I would never strike or injure another person in that manner. I have lived up to that promise in the fifty odd years since then.
Along these same lines I have always felt that the various wars we have been involved in were totally against God’s will. The Quaker belief that God is in each of us and therefore if you kill another person you are killing God also. Through some pretty diligent study of Quaker practices I have found that I am very much aligned with many Quaker belief. Being a nonviolent person is not something that I suddenly decided to do; it is instead a vital part of my very being.