Man was made to mourn: A Dirge 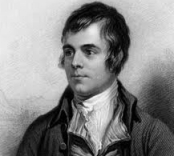 Many and sharp the num’rous ills Inwoven with our frame! More pointed still we make ourselves Regret, remorse, and shame! And man, whose heav’n-erected face The smiles of love adorn, – Man’s inhumanity to man Makes countless thousands mourn!   By Robert Burns  1784

I always wondered where the phrase “Man’s inhumanity to man” came from. I didn’t realize it is generally attributed to Robert Burns. I’m not sure what the difference between a poem and a dirge is? They look pretty much the same to me.

Wikipedia, as usual, has several other references for this phrase:

I find myself uttering this phrase on a regular basis lately. There has just been so much tragedy in the world in my lifetime. Now people are saying that the latest school massacre is stating to cool down already so they doubt that any new gun regulations will be implemented!

Being a firm believer of the Quaker phrase of “the light of God in all of us” I find it unfathomable that some seem to almost totally extinguish the light within themselves. Being that God gave man free will it is our choice as to whether we turn that light into a full-blown flame or just let it languish within us.  Many of the references above are spiritual in nature so I’m sure that I am not the only one who thinks this way.

It just saddens me to my very core how cruelly we sometimes treat each other. It is indeed our greatest sin, our lack of cardinal virtues, our inhumanity, our greatest sorrow,  a weakness in our soul, and definitely should make us all mourn. God gave us life so that we could love one another and take care of one another and to praise him.

Why aren’t our spiritual leaders talking about man’s inhumanity instead of things like if Mary was a virgin, if full immersion is the only way to baptize, whether we are saved by grace or something else, and list goes on and on…..