I have been fascinated by gardens just about all of my life.  I think it started with Mrs. Forester when I was six years old.  She was a very old lady, at least in six year old terms, who lived next to us in urban Indianapolis.  I don’t know if she was widowed or just a spinster but she was always nice to me even though I was probably a pretty hyperactive kid that most old people have little tolerance for.

Mrs. Forseter’s back yard seemed like it was a palatial estate when in reality it was probably no more than 20 x30 feet. Her larkspurs seems to tower as high as the mighty redwoods of California. She also had a vegetable patch with things I had never seen like cauliflower and broccoli.  I was fascinated by the sight of her back yard.

It wouldn’t be long before I had my own garden even if it was only an 8 x 8 feet patch.  I proudly harvested the radishes and leaf lettuce for a family salad.  My first “real” garden wouldn’t happen until I was about 14 years old.  By then my mother had left for greener pastures taking my older brother with her.  That left Dad, me, and my younger brother.  Dad was pretty much a meat and potatoes guy typical of his generation so this country garden was mainly made up potatoes, corn and green onions along with some green beans and a few other simple veggies. 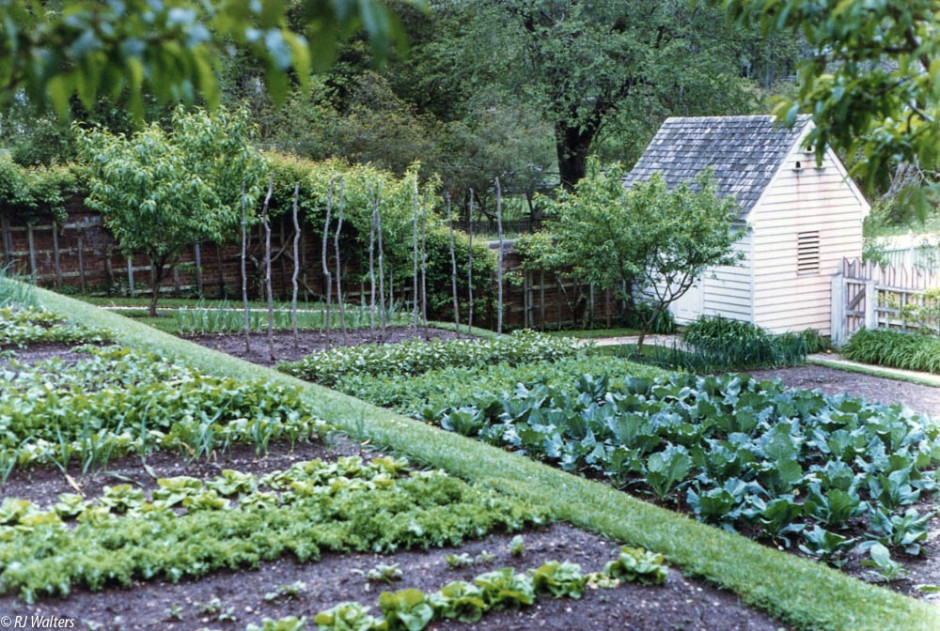 My first trip to Mount Vernon and Monticello was with my class for a senior trip in high school.  The gardens there were simply amazing. During that trip in 1965 there was little mention of the fact that the gardens were maintained by slaves, that recognition would come about  twenty years later on my second of three trips.  I found that I was much like Thomas Jefferson in that I like to experiment with crops I had never grown.

For the score of years between 1965 and 1986 there was little opportunity for a garden as I lived in apartments and a condo but I did have tomato plants and such on the deck. When the married version of myself finally got a stand alone home I decided to “do it up right” as far as a garden was concerned. This one had a fence around it and raised beds with paths of mulch.  It was my most picturesque garden but certainly not my last.

When I retired in 2000 and moved to our current 2 1/2 acre homestead one of the first things I did was to buy a rear tine tiller at an auction and proceed to make a 25 x 50 feet veggie garden.  It would be the most productive garden I ever had and would continue for about ten years until my body started rebelling against all the bending over to maintain it.  I now have a 10 x 32 feet version with heavy duty landscape fabric on about 80% of it.  It is pretty much weed free without a lot of effort.