For this artsy Saturday, I want to give you a picture looking out the dining room window of the Giant City Lodge State Park in southern Illinois.  The park is not big and “Giant City” is nowhere to be found but it reminds me of Yellow Stone and other national park lodges. The CCC statues there is to honor all those who built the lodge in the 1930s.

This morning I put out a post of the cons for my recent trip into southern Illinois so this afternoon I wanted to give you a gem to counterbalance it. That gem is Giant City Lodge.

Before I do that I want to give you a little background on my habits during my uRV trips. I usually stay the night at a State park at during the trip. Part of my ritual is to get up early as I usually do and find a local restaurant that serves breakfast.  I do have a Coleman stove in the uRV but it is yet to be used. The microwave is primarily for heating up Big Mac and such that I buy  as carry-out for dinner. Camping just doesn’t include cooking and washing dishes if you ask me.

So as I was sitting at the campsite I got out the brochure about the Mississippi River routes in Southern Illinois that brought me to this place and found one of the highlights was the Giant City Lodge. I thought it was kind of strange to have a state park lodge as a highlight so I thought I would try it as that is the park where I was camping.

The next morning when I pulled up to the front of the lodge it was nice but not much different from most of them.  But when I got inside I found something completely different. I have been to many national park lodges and this one could compete with almost any of them for its beauty.

It was built by the CCC during the Roosevelt years of the 1930s.  I don’t know how long it took to build or how many people worked on it but it must have been quite a crew.  I happened to get their just as they were opening for the morning so except for one other elderly gentleman I had the dining room to myself. It was a very peaceful meal looking out the massive windows onto the beautiful courtyard.  Now without further ado here are some pictures for our enjoyment: 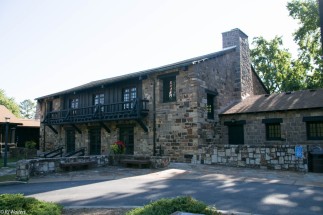 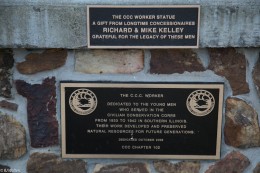 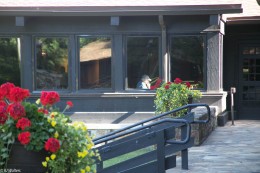 I want to close the post out with a little about the title of the park. While driving up to the park I never did see a Giant City, just a few small towns?  I guess the original inhabitants had some grandiose plans that just didn’t attract enough potential people to live out.  🙂

When I came across this contraption at the O’Bannon State Park in southern Indiana I had no idea what it was about. But a couple hours later there was a full-blown demonstration with oxen and all .  It is a hay press from the 1800’s. Back then they didn’t have hay balers as we have today so basically this screw machine pressed the hay into tighter bundles so more could be put in the barn.

O-Bannon State Park IN – Winter on the farm

This picture was taken during a recent visit to an Indiana State Park near the Ohio River. It was a very interesting day and I will soon be putting up a Travelogue post about it.  This old guy was later hooked up to a press that was one of the first to compact hay into bails. It was nice to see the event so will attended even on a chilly February morning.

Dreaming of a field of wildflowers this cold January morning.  This one was taken at a State Park in Indiana a few years ago.