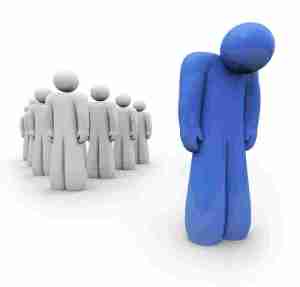 I know that I am not the only person in the U.S. who is deaf. In reality there are more than three million of us around. About two million of those are like me who went deaf as an adult. That means for Indiana where I live there are about forty thousand of us around. But since I am not active in any deaf clubs or organizations I seldom come across another deaf person in my daily life. When I do I am most often too surprised to try to effectively communicate with them. So, to me being deaf almost means being alone in the world. I am constantly around only hearing people.

When I first realized that deafness was the reality for me I indeed felt alone in the world. My ear doctor of several years basically told me that there was nothing else he could do to save my hearing so “please go away”. He did not offer any referrals to groups or such that could help me cope. I got the idea that he thought of me as one of his failures and he wanted me out of this sight as quickly as possible. As I later learned from other late deafened adults this was not an unusual scenario with a ENT doctor.

Up until that time I did not have any friends, family, or acquaintances who were hearing impaired. So, I like most other hearing people didn’t realize that those who were deaf in later life were just like everyone else except they couldn’t hear. I had read stories about how deafness caused severe depression in some; even to the point of thinking of suicide! I very much dreaded the day that I would lose the last bit of hearing. I felt very much alone in the world. The only support I seemed to have was from my dear wife and, of course, she knew no more than I did about what I was going to face.

Here it is 22 years later and I did survive those years and everything turned out fine. At least for the most part. I did go through some periods of depression but managed to cope with them. I found support groups in the early years although I have not made contact with many of them for more than a decade. Yvonne and I learned signed English sign language. Over the years I have accumulated all the various technologies that help me cope. Do I sometimes still feel alone in the world. You betcha. I often say that I feel the loneliest when I am in a room full of people. More on those things in later posts.

And the journey continues….