On the chance that you got time to see my last post I wanted to come through on my promise to give you a sure fired solution for our deficit problems. This one seems like a no-brainer so it is surprising that no one has come up with it yet. Before I give you the solution we need to look over some graphs and tables.  After all both government and private corporations thrive on graphs and tables. 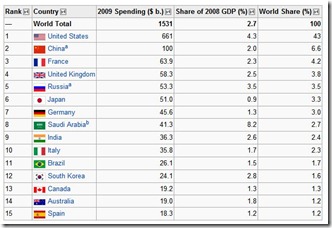 These graphs show military spending by country. Something seems to be very strange here? It seems that the U.S. spends more on it’s military than the next twenty countries combined! Why is this? I have my own theories and here they are.

If we look at the world as one big playground then our military budgets are kind of like the sticks we carry around on the playground in order to get our way. Let’s reference this to China which is the number two military spender. Their stick is the size of a baseball bat. Going down the list South Korea’s is the size of a very small branch. It can only be used for poking. That might be annoying but not harmful. Ok, now lets get to the U.S. Our stick is the size of a redwood tree. Anyone who has seen a redwood tree knows that they are huge! Well so is our military budget and it is about easy to maneuver as a redwood! Lets look at it another way. China spends about $90/person/year and the U.S. spends about $1800/person/year! That stick is now the size of a whole forest! Why??

How can South Korea who has a population of about 50 million people have a military budget that is only 5% of ours. One of the reasons is because the U.S. has so many soldiers still there almost sixty years after the Korean war.  So why should South Korea spend their valuable money on the military when the U.S. will do it for them.  I wonder if this has anything to do with why their economy is growing while ours has been stagnant for almost a decade now? We have so many soldiers and weapons strewn throughout the world that is seems impossible to even keep track of them.  Germany is another example; we still have thousands of soldiers there to do what the Germans could easily do for themselves. Why? Like South Korea, Germany’s economy is prospering while our is stagnant. And then there is China; I don’t think I have to give you any examples here!  Surely I’m not the only one who sees this relationship between military spending and deficits?

Mr. President, you are a pretty smart fellow so I think you get the idea. When you were campaigning in 2008 you said you would do something about this but it seems you are going the way of your predecessor and also making us the world’s policemen. How can we expect to reduce our deficits when we spend so many times more than anyone else for our war machine? How can we, like the rest of the industrial world, manage to provide healthcare for all our citizens when we spend so much for bombs and other weapons of mass destruction?

I am not suggesting that we drop down to parody with our the rest of the world, I know the Republicans who now control the House would never go for that,  but how about we only spend four time more per person more than anyone else? That would still leave us with a darn big stick and one that is manageable too. That would save us around $300 billion per year? I’m not up on the latest numbers but I think that would put a pretty big dent on our deficits.

I am just a simple guy with a calculator but this seems like a no brainer to me. I like the old saying that “If all you have is a hammer then everything looks like a nail”. Well with our super colossal war machine everything seems to look like a military conflict ready for us to go into. Maybe if we brought our peace efforts even to within a minute fraction of our war efforts we could start seeing things in a different light.  Maybe everything would no longer look like nails? When you were campaigning in 2008 I thought I heard you promise to do that. What happened?   Please get that zeal back. Put a few more peace makers on your team and a few less generals.

Feel free to use any of this info in your State of the Union on Tuesday. You don’t even have to give me any credit for bringing them up.