Ok this is the close up post for this on-the-road series on Washington DC.  I missed a few days posts because of late night arrivals to the hotel and just being too tired after we got home yesterday. 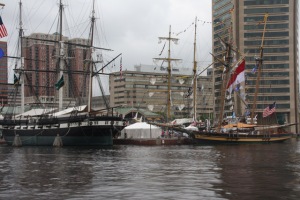 After we left DC on Monday we went to Baltimore Maryland’s Inner Harbor for a quick visit. We got there just after a celebration weekend for their part in the war of 1812. Fort McHenry there is where our national anthem was written during this war so they make a big deal out of that one. As a result of the celebration there were a number of tall ships there in port.

During our limited time there we decided to go to the National Aquarium.  It cost more than $25 each to get it so we were expecting the best. Unfortunately we were disappointed. While the building is large for the most part there were just thousands of small displays about fish and much other info. There were a couple of big tanks but nothing too exciting. If we had a full day and wished to know a lot about fish this would have been the place to go.

I did manage to get a plate of oysters on the half-shell while we were there. It has been quite a while since I had them and they, unlike the aquarium were exceptional! I just don’t trust oysters that are sold more than 50 miles from their source, especially on the half-shell/raw.

I promised to give you some overall thoughts about this trip so here goes. This was the first time we have gone on a bus tour group trip of this kind.  We found some things that we wished were different but overall I think it was a very positive experience.  We wished we could have eliminated things like shopping malls and such and that we could have spent more time as some of the sites we whizzed by.

But the positive part of the trip was the camaraderie of going with a group of about 40 other people. We made several new friends on the trip and thoroughly enjoyed almost everyone with us.  There was one RR Republican who seemed to want to “convert” us to the “right” party on occasion but for the most part we were able to avoid her 🙂 .  My wife is much more sociable than I am so she thoroughly enjoyed that part and I enjoyed it because she did.  She was the first one of our group to jump up and dance with the African-American group who joined us for the last night celebration at the hotel.

Would we do it again? I can say yes to that question but we are not giving up on our solo vacations. As a matter of fact we will be spending a week by ourselves at Mesa Verde National Park Lodge in about three weeks from now. So, expect another on-the-road report soon….