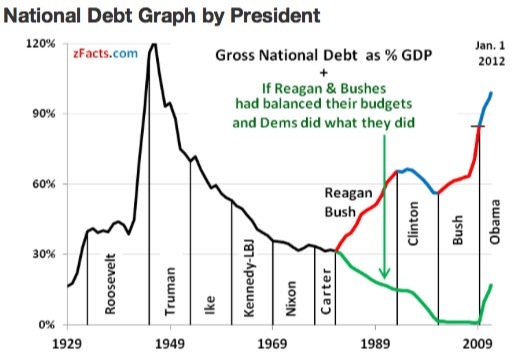 I know there is a lot of fury going on now about how President Obama has increased the national debt. So, when I came across this graph it got my attention. I have had several ranters here lately who proclaim that “that idiot Obama is bankrupting the country”. They go on and on about the increased deficit and how it is their sole reason to drive that “idiot” out of office. I am going to try and give you some insight into this situation but as President Clinton said recently you are going to have to pay attention…

Am I the only one to notice a trend in the graph above? The sharpest rise in the national debt increased under President Roosevelt. Of course that was because he was trying to dig us out of the biggest financial meltdown of the 20th century.  It is widely acknowledged now that the Depression was primarily caused by the rampant speculation and the lack of regulation of the financial industry.  Mr. Roosevelt put in place the necessary curbs to keep us out of trouble in those areas for almost fifty years.

Then came the Reagan years of de-regulation and trickle down tax breaks to the upper 1%. You can see by the graph above what happened. Our national debt skyrocketed for the first time in decades. Trickle down economics just didn’t work. When Clinton came in office he was saddled with a trend line out of control. But with the help of a co-operative congress he turned the curve negative again during his time in office.

When Mr. Clinton handed over the Oval office to Mr. Bush the debt line was negative but that trend would not hold. Like Mr. Reagan, President Bush decided to give even more tax breaks to the 1%ers and also started cutting back all those nasty regulations that was holding back our country.  His tax cuts and later the “off-the-books” wars  turned the curve as sharply as it was during the Great Depression but without a depression. When he turned the Oval office over to President Obama he gave him a financial meltdown as extreme as Hoover gave FDR. He also handed him a trend line of 750,000 job losses a month!

Now here we are ending the first term of President Obama. He turned the job losses around to gains in a few months but not enough to counter the huge losses from the end of the Bush years.  President Obama, like Mr. Clinton before him, went to congress with jobs bills and infrastructure improvement plans to get the economy going again but this time there was absolutely no cooperation from the other party. They deemed it their sole goal was to get Mr. Obama out of office. Nothing else mattered to them.  They need control of the presidency so that can “fix things” 🙂

We are now in a political campaign season where the screamers are saying that Mr. Obama hasn’t got us out of our 21st century depression quickly enough so he needs to be thrown out. His opposition in this election doesn’t seem to have any answers to the problems other than more tax breaks for the 1%ers.  I wonder how that would turn out?  Just look again at the steep red lines in the graph above. Tax breaks for the rich and deregulation got us into this mess not once but twice! Surely we won’t fall for it a third time? How is doing the same thing all over again in three different Republican administrations supposed to result in a different situation?????