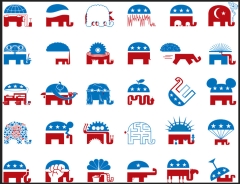 The effort would put a new twist on the Republican-vs.-Republican warfare that has consumed the party’s primary races in recent years. In effect, the establishment is taking steps to fight back against Tea Party groups and other conservative organizations that have wielded significant influence in backing candidates who ultimately lost seats to Democrats in the general election.

I am glad to hear that the not-so-radical in the GOP are declaring war on the Tea party. It’s about time. Maybe a nudge toward the middle will finally happen. But then again this could be just one radical right organization battling another? Given that Carl Rove is one of the leaders of this new group I suspect it to be the  later.  But, even then I would prefer Mr. Rove’s tactics over the Tea Party’s any day so more power to you Mr. Rove. I hope you put them back in the closet where they belong.

I certainly hope that this new-found wisdom in the GOP leadership is more than skin deep. They need to move more into the mainstream of American life if they hope to succeed as a party in the future.  They need to understand that some of their principles, like those of the Democrats, are currently on sinking sand.  They need to at least make some adjustments and then move on from there.

While I applaud them being fiscal conservative they have also to understand that a rising tide raises all ships. They have to occasionally come out against the power elite and for the common man. Until everyone has a chance at a living wage prosperity will never return to this country.  They have to understand that true power in our democracy resides in our citizens and not in the one-percent who controls most of the wealth and gets most of the current benefits from our capitalist system.

When they realize these facts they will once again be a party for more of us in the mainstream of life. They have to consciously move from the radical fringes to convince us that they are serious about becoming relevant in today’s world. In the end I am pretty skeptical that that will happen with this latest tiff within the party but who knows? I was a Nixon and Ford Republican; it would be nice to be able to come back to the party of my beginnings.