The difference between our rich and poor grows greater every year. Our distribution of wealth is getting more uneven all the time. . . . A man can make a million over night and he is on every page in the morning. But it never tells you who give up the million he got. You can’t get money without taking it from somebody. – 1 June 1930  Will Rogers 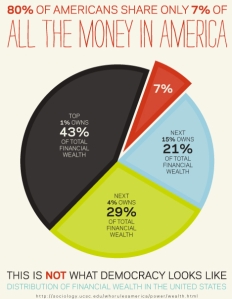 As Will points out here the difference between the rich and the poor has always been greater than many of us would like to see but I really don’t think in Will’s day it was even remotely as wide a gap as it is today.   The latest statistics show that there is about $58 trillion of wealth in the U.S.  But as the chart to the right shows 80% of the population  controls only 7% of the wealth. That is about $10,000 per person for 80% of us. The top 1% average $7,000,000/person.

But as Will further points out that there is just so much wealth that can be owned. There has been a twenty fold increase in billionaire in the last twenty years.  In order for the money to come to them it had to come from someone else. Of course we all know where it came from. It came for the wages and benefits of the 80% that have actually decreased over that same period of time.

I’m not a financial wizard but it really doesn’t seem like rocket science to me to understand that if we want to grow our GDP we must have citizens who have the money to buy additional goods and services. The 1% can only buy so many jets and yachts. 🙂   In fact most of their increased wealth is likely just sitting in off-shore accounts accumulating interest.  When the elite among us insist on stagnating wages there are no additional resources to grow our economy. It is a Catch-22 and that I can understand so why can’t the big shot economists in the gOp figure it out?

8 thoughts on “Taking It From Somebody….”