On The Road Cleveland – Day 5 Downtown

Since we have been walking so much the last few days we decided to take it a little easier today. We drove the mile to the center of the city instead of walking. Our fatigue and the fact that it is still in the 30s and 40s here enticed us to take the easy way.  When we got close to the Tower City Center we found a convenient parking garage. I have been reading about a 4th Street complex of restaurants and sites so we decided to head there. It was not as we expected. There were a number of the more well-known local restaurants there but they were all closed until dinner and there was little else in the area. It seemed that almost the entire downtown area was deserted.

Cleveland downtown it seems is pretty much like most of these metropolitan areas in that they are not kept in the most pristine shape. We meandered down to the Tower City Center amongst the tall high-rises and found a shopping mall and a casino there. It was surprising to see a casino right in the very heart of the city. 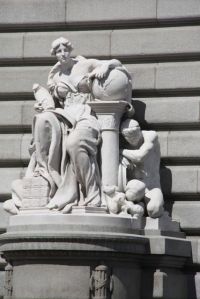 After eating at a small mexican restaurant we had enough of touring for today and headed back to the hotel for a mid-afternoon nap before heading for the Blue Point Grill for dinner. This is a very upscale seafood restaurant specializing in seafood so of course I had to have a plate of oysters on the half shell.  They were very good. I also had the special for the night which was flounder and it was to die for. Yvonne had seared trout. She gets pretty picky about this dish but this time it was cooked to perfection as it should have been for the price. We don’t eat out in upscale restaurants but once a year or so and this was definitely a good one.
Tomorrow we will do a little more touring and then head for the Ohio/Pennsylvania border for a visit with our friends. As an overall wrap-up,  Cleveland reminds me of Pittsburgh. It is not the cleanest or as tourist friendly as many that we have visited but still worth the visit.  The University Circle area was the most culturally oriented part of town. The Cleveland Clinic, University Hospital and three or four colleges are located there as well as most of the museums.  If we are ever to do this visit again I would likely choose that area as our home base and skip the downtown area. 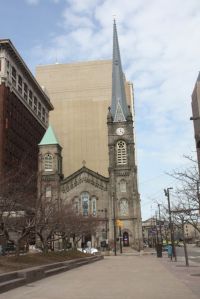 We thought about going to the Rock & Roll Hall of Fame which is less than a mile from the hotel but when we found that the tickets were $25 each we changed our minds. I was never much of a rock and roller, I was more into folk music in my hearing years so the enticement at that level of admission just wasn’t there. 🙂