Christians have a presumption against war as well as an obligation to help heal those who suffer its consequences. 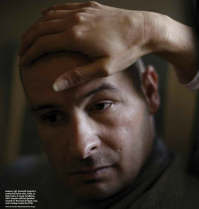 The above title and words come from a Sojourners Magazine article by Gregg Brekke in the April 2014 issue. I have made it clear on most of my blogs that I am pro-peace in almost all regards and of course that makes me anti-war. All the wars and conflicts that the U.S. has fought in  my lifetime have not had any long, or even medium term, consequences. If they had not been fought at all nothing much would have changed.

The big war of my generation was Vietnam. Because of my hearing loss I was not drafted into fighting in it but I did lose several good friends in it. That war claimed 55,000 American lives and many more thousands in psychological and emotional duress. Even today after almost 50 years there are still those of my generation who can’t get loose from their experiences in Vietnam.

I would add a list of all the wars we have been involved in since Vietnam here but that would take up most of my self-imposed 500 word limit for this post. Thousands and thousands of  young American lives have been lost in our meaningless wars. Being a follower of Jesus, it is clear from his words that he was against all forms of violence. I very much align with those thoughts. Does that mean I am against those who fought in those wars, either by choice or were drafted? Absolutely not!! As the quote above says we followers of Jesus Christ have an obligation to help heal those who suffer from war’s consequences.

The article from which this quote comes goes on to cite  examples of those injured and killed by war. PSTD is a new acronym explaining an age-old condition. You can’t expect anyone to come back from war in the same way they left. The very act of killing in the name of your government and in defending your life in those circumstances changes everyone exposed to it. Some return much more damaged than others. Some don’t return at all.

As the article says veterans can be the biggest allies in advocating for peace. They have been exposed to the ugly realities of war. I feel very deeply and emotionally for the wounded souls who have fought in our wars.  It is up to us as Christians to do everything we can to ensure that help is there to heal those who have been grievously injured both physically and emotionally. We need to make it very clear to them that while we don’t condone the wars that they might have fought in we will do all we can to understand their pain and to help them overcome it.