This is a continuation of my Friday posts about the book “Yin/Yang and American Culture” by Kim Eun. It is a book well worth reading about the differences between America and much of the rest of the world. This post is about remaining active in our senior years. 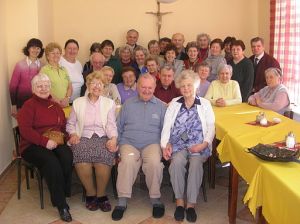 Although America is criticized for its youth-oriented culture, American elders enjoy more productive lives than their Asian counterparts do. From working as independent consultants to serving as volunteers, American elders can retain their zest for life….

In contrast, many Asian elderly expect to stop learning at a certain age. It is rare to see an elderly person visiting a library unless he or she was a scholar. The typical mentality for Asians over fifty-five is, “I’m old, so what is learning for?” Opportunities for elders to lead productive lives or use their energy in positive ways are limited in Asia.

Unlike in America, it is difficult in Asia for senior citizens to get jobs at restaurants, grocery stores, or elsewhere. In Asia, even the volunteer organizations do not appreciate the services of elders. In the United States, an eighty-year-old man who opens the door for patients at a hospital is one of almost 445,000 retired seniors who do volunteer work. They serve their community as public park guides, library storytellers, and literacy mentors, among many other roles….

This topic rather surprised me in that I always thought that the elderly in Asia were treated with greater respect than in this country. The author did go on to say that if the elder “earned” respect then it is generally given. I don’t know how that works though. How much is enough for earned respect?

I am very thankful that in America elders can and generally lead very productive lives. I have been retired/semi-retired for going on to fifteen years now and I can honestly say that I think as far as my contributions to society go I have been much more productive during these years than I ever was during my “working” years. Of course it also follows that, despite all my growing aches and pains, these years have been the happiest of my life.

The quote above says that about half a million seniors do volunteer. But remember that this book was written in 2001 and that number has increased substantially since then.  Ms. Eun says further in her book that many Asian elders don’t bother to take care of themselves during their senior years. It seems that all they do is wait to die so to speak. How sad is that? Almost as sad as a woman having to cover her entire body when she goes out in public so that men won’t see her.  😦

I certainly appreciate that things in America are better for us seniors than they are in Asia….

One thought on “Yin/Yang and American Culture…. Remaining Active”

Are you interested in telling stories of your life?