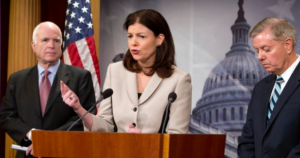 WASHINGTON (AP) — Republicans now in charge of Congress offer their budget blueprint this week with the pledge to balance the nation’s budget within a decade and rein in major programs such as food stamps and Medicare. More pressing for many Republicans, however, is easing automatic budget cuts set to slam the military.

It is not accident that the GOP wants to take money away from helping  the poor and give it to our already super extravagant military budgets to the tune of exactly $50 billion on each budget. But that is just the first step in the process. The overall goal as the article mentions is to eliminate Medicaid and food stamps entirely from the federal budget and turn it over to the states. Can Medicare be very far behind??

As a stop gap measure the GOP wants to just throw a given lump sum of some undetermined value to the states and then walk away.  The problem with that strategy is that all the States must balance their budget but that is rightly not a requirement for the federal budget. Sending it to the States would mean that in times of downturns helping the poor would have to take a big hit. It is not as if suddenly just working two minimum wage jobs would meet a poor family’s needs during hard times.

Will all those senior citizens who vote exclusively GOP tolerate this happening? If their purse is robbed will they look for other political approaches? I kind of think they finally will. Yes, we have to do something about balancing our federal budgets but doing it on the backs of the poor and with no pain in the military budgets is NOT the way to do it.  We, 5% of the world’s population, spend more than the rest of the world combined on our war-machine.

If we just quit trying to be the policemen of the world and pared our military budgets to be on parity with everyone else our overall budgets would quickly balance. We don’t need to be hip deep in all regional conflicts in the world.  That practice just makes too many enemies who then want to do us harm. We need to step back and tell our world neighbors to take care of their own backyards and we will do the same.

PLEASE DON’T BALANCE OUR BUDGETS ON THE BACKS OF THE POOR.