The title of this post was written by my folk music hero Wood Guthrie many years ago but that is not the topic of this post. Instead it is to say so long to a fellow Hoosier Dave Letterman. Although I was not a regular late-night TV viewer in any form I did catch Dave’s show on occasion. I have a certain kindred relationship with Dave even though it is  assuredly one-sided.

Dave is a younger fellow than me by almost six months. I think he was born in the same Indianapolis hospital as I was. I almost took a summer job during college at Channel 13 in Indy where he was the weekend weather man. He was outrageous for his times there for his ad-libbing the weather.  Predicting hail stones the size of basketballs and give weather predictions for fictitious towns. He was a funny guy even then. 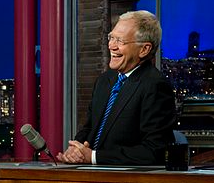 I know Dave has been a New Yorker for quite a few years now but I kinda believe he still has his Hoosier roots in him so even though I am his elder and I have been retired for quite a few years I don’t think I have to give him any suggestions about his retirement. I’m sure he won’t be like so many of those celebrities who can’t find anything to do outside the spot-light and therefore try to “change their mind” about leaving.  If he gets bored I would welcome him to be a guest poster here but I don’t image that would ever happen. I guess he racked up $30 – $40 million a year for his time on late-night TV so he has plenty of other options beside meeting ThatWiseGuy.

Anyway Dave, I wish you well in your retirement years. As another hero of mine Will Rogers said have just fun and don’t take life too serious.

I am RJ and I am ThatWiseGuy