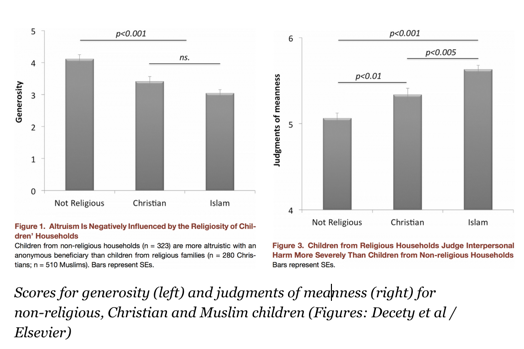 History backs-up the scientific evidence that secular people are more moral, as reviewed by Israeli psychologist Benjamin Beit-Hallahmi. Most white supporters of the US Civil Rights Movement were non-religious, for example, while the apartheid regime in South Africa was led by devout Christians and opposed by atheists.

But the view that non-religious individuals are morally dubious is deeply embedded in American society. Atheists and agnostics are considered less trustworthy, even immoral, which explains why people who don’t believe in God are unlikely to be elected to high political office, such as President of the United States….

”It’s sometimes claimed that secular families are dysfunctional and rudderless because they lack the security of religion. But sociologist Vern Bengston, who has run California’s Longitudinal Study of Generations since 1971, says this isn’t true: “Many nonreligious parents were more coherent and passionate about their ethical principles than some of the ‘religious’ parents …

The vast majority appeared to live goal-filled lives characterised by moral direction and sense of life having a purpose.”

“Morality and religion are two separate things: religion has been made by humans and morality is part of our biology,” says Jean Decety.

In some ways the above poll surprised me but in others it didn’t. I would think that people who religiously (pun intended) attend weekly places of worship would be kinder and more generous than those who don’t.  After all, Christians are exposed to the Gospel messages that often talk about the poor and the downtrodden. Shouldn’t this then become the foundations for their lives?  This poll is about children but I kind of think that children learn most of these types of things from their parents.

I am going to try to rationalize why religious children might be less altruistic than secular kids.  Most religions  embrace the belief that they are the only ones who have really figured out the true nature of God.  Everyone else is wrong to one degree or another.  We are holy &  they not so much. The logic goes like this:

“It is our job to get all those who believe things different from us to admit that they are wrong and our version is right. Then if they publicly proclaim that fact they can officially join us. Until that happens they are to be viewed with suspicion and maybe even distrust. Once they are part of our clan then they are worthy of our empathy and generosity. Real friendship/caring can only be fully established if you are part of us; if you leave us that friendship will quickly evaporate”

With that mentality the children maybe inadvertently learn of the us/them divide in most churches. My personal theology says God cares equally about all of us. He doesn’t restrict his love to religious alliances.  I found it interesting that Most white supporters of the US Civil Rights Movement were non-religious.  Another interesting point is that Muslims are the least friendly and meanest of the three groups.

I will close here by narrowing my brush:

Does my rationalization above apply to all those who claim membership to religions?  ABSOLUTELY NOT… but I think it is a pretty good description of too many of them…