This is going to be one of those posts that wrenches my heart. It was one of the most tragic days of my life.  When my mother abandoned my father leaving him with two very young boys  we changed from a two-income family to one very low payed bread winner who struggled daily to make ends meet.

Dad was never much of the communicator so he tried to shield us from all the problems he faced just getting by day-to-day. He never talked about his constant troubles with money and being so young I never realized what he faced in that or other areas until years later. I guess I was just too busy being a kid.

He was always there for us, if not in words, certainly in actions. He managed to find enough money to get us our school books and a couple of pairs of new jeans for each coming school year.  I, like most kids I guess, looked up to him as being a hero albeit a silent one. He never spent anything on himself. His hobby seemed to be to take all the attachments off the vacuum cleaner and to use just the nozzle to vacuum the entire carpet in our rented houses. He spent hours doing that. 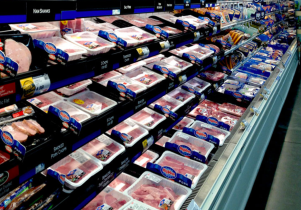 Dad got paid on Thursday’s so that was the day to fill up the tank of the car for the coming week and to do the grocery shopping. He usually did the shopping on his way home but one time for whatever reason my brother and I went with him.  We left dad and just cruised the isles to see all the good stuff. When I finally went to find him he was in the meat department and was stuffing pork chops into his shirt!!  I simply couldn’t understand why he was stealing!! It devastated me to even think of my dad as a thief but there it was.  In that instant he was no longer the super-hero I thought him to be.. I was devastated…

I never told him about seeing this incident but I also never went with him again to a grocery store.   It was not until several year later that I realized that it was either shoplift or go without a substantial part of our diet. Like many in similar circumstances he was just too proud to ask for help so he saw shoplifting as his only solution.  As I grew older I came to realize just how poor we really were during those years.  I liked to imagine that this was the only time he shoplifted but in reality I’m sure it wasn’t.

That vision of him with his shirt open in the supermarket was emblazoned on my brain for years but the end result was that I came to love him even more because of it. Throughout my adult life I constantly thought to myself where dad was when he was my age and often wondered if I could have managed as well as he did under his circumstances.

The older I got the more I loved him for what he did for us. I was looking forward to spending some serious time with him after I retired from corporate life but tragically he died of cancer just five months short of that date.  More than fifteen years after his death I still think of him daily…