There are a lot of things about today’s religious establishments that hinder their outreach to the 21st century population. The glass, or maybe stone ceiling is one of them.

Faith leaders grappling with women’s inclusion in religious leadership roles are in danger of the same pitfall. By focusing exclusively on “what is traditional” for their religion rather than asking the crucial question: “What change is necessary for religion to thrive?” they risk alienating 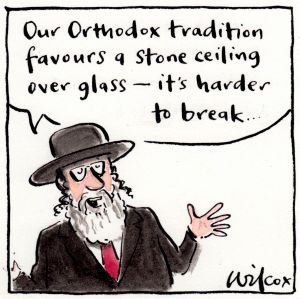 50 per cent of their flock. They also deprive the entire community of the talent, skills and enthusiasm that women would otherwise contribute.Insisting
that men continue to wear the trousers when it comes to religion might be traditional, but, as the pantalon rouge debacle illustrates, it may not be worth the price.

Source: Religion must either modernise or face obsolescence

I know much of the Christian establishment takes their traditions in this matter from the Apostle Paul, who by the way was a lifelong bachelor, instead of Jesus who had several women in his inner sanctum.  To me it is important to realize that early Christian writings, including much of the New Testament, were written at a time that women were not much above slaves in the social hierarchy.  It would take another 20 centuries that women began to be accepted on an equal basis as men.

Just because most religions started a couple of millennia ago doesn’t mean that they should be stuck in that time period. Things change and the church should change with them. I am willing to bet that Jesus would celebrate women being in full leadership roles today, even if it was unheard of in his day.  I think the church would be better off but instead we stick to following centuries old traditions that were formed by ancient cultures as if somehow they were better than today.

If religion is to strive, or maybe even exist, it must use all human resources at its disposal.