I am certainly one of those whose idea of God has changed drastically during my lifetime. I started out as a kid in a Catholic school in the 1950s who was taught that only Catholics would go to heaven. It is certainly not that God is changing but instead it is my idea

of what God is. I have gone from the beliefs of “Only Catholics” to one of Universal Salvation. I deem this change as progress, others more fundamental (stuck in their ways) will say it is heresy.

Looking at the ages, the concept of God has changed radically. He started out as something to be feared, who demanded blood offerings to keep his wrath at bay. Jealous, wrathful, impetuous, incendiary would be good descriptions of God at that stage. He was feared for his almighty power. At least in some circles, these traditional concepts of God are being laid to rest in favor of a more benevolent being.

When Christianity burst upon the scene via Jesus Christ much of the wrathful God was replaced by a loving and caring God who told us to love each other as He loved us. He told us much of what we believed was wrong. He used the phrase “You have heard it said, but I say to you..” Sadly, his messages are being muted to one degree or another by different versions of Christianity still today. But there are some, like one of my favorite religious authors, Philp Gulley, who have come to the conclusion that if God truly loves us all and wants all of us to be with him in eternity then he will somehow make that happen. I am now one of that fold for I think not believing that possibility is to take power away from an omnipotent deity. 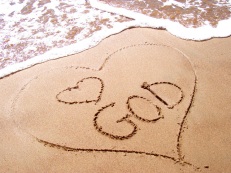 Especially in our day, many struggle to find meaning and tranquillity through spirituality. That, not established religions is what is growing today. According to an article in Christianity Today, one-fourth of young adults said that they wanted a break from religion; another 26 percent said church members seemed judgemental and hypocritical of others; 20 percent didn’t feel connected, and 15 per cent felt downright unwelcome. When you finally grab hold of the idea that God will reconcile all of us to him, all of this judgemental and hypocrisy flys out the window. You no longer need to separate yourself from those around you. You have finally reconciled that all of us are children of God and are to be loved. All of us.

I am convinced that someday in the future the world will finally see the goodness of all people and be at peace. I realize that this is a pious dream that is very distant from the original concept of Deity but I dream it none the less.