The TV show American Pickers is basically about obsessions.  Most of the episodes are about a couple of Le Claire Iowa men going to “pick” people’s collections.  Many have thousands of square feet of barns, outbuildings, and old houses stuffed with things they have purchased throughout their lives. 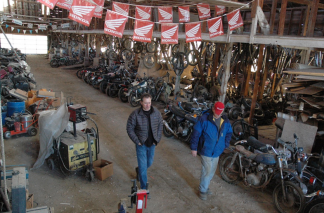 They dig things out from massive piles and ask if it is for sale? More often than not the answer is “no, I don’t want to sell that”. The item is likely something that they threw into a barn 30 years ago and hasn’t seen the light of day since then! So, why does it have such a pull on them? The answer, of course, is that their “collecting” is really an obsession.

When I was younger I heard stories of people who grew up during the Great Depression in the 1930s and had obsessions about throwing things away. They simply couldn’t do it. Most of the “It’s not for sale” group are no more than a few years from their death but still can’t get themselves to let go of anything. Some of their children in this TV series are begging their parents to sell as they don’t want to have to deal with the piles and piles after they are gone.

Now on to a personal note. As a 70-some-year-old, I don’t have very many collections.

After making this list I guess I do have quite a few collections. It’s funny how this kind of stuff can sneak up on a person.  But at least my collections are contained by a 10 x 12 study. No intervention needed 🙂