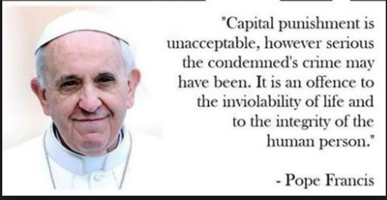 I have let it be known many times here on RJsCorner that I am pro-life in all regards and that certainly includes the death penalty. So, when I heard that the largest Christian church in the world’s leader Pope Francis, backed by bishops around the world, declared the death penalty unacceptable in all cases I lept for joy. Finally, at least some Christians saw that public execution was an affront to the very nature and essence of God.  Christians have a long history with the death penalty, going all the way back to A.D. 33, when the Roman Empire crucified Jesus.

Sadly, eighty-five percent of executions in the past 40 years have taken place in the Bible Belt. This means the Bible Belt is also the death belt in America. How did the church get into this situation? In the early days of Christianity when Roman soldiers wanted to join the church, they were told that they would have to find another occupation as being soldiers was not compatible with the teachings of Jesus.

There are six basic ways that life is abruptly ended:  murder, abortion, suicide,  lack of lifesaving healthcare, execution, and war. At least the last two are instituted by the government.

Jesus was pro-life in all regards and if you ask me, all his followers should proudly follow his example.

2 thoughts on “Abolish The Death Penalty”