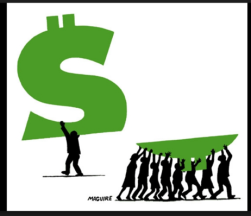 This post is about the question “Is America’s form of capitalism being pushed aside?” Is the world moving beyond the American definition?  Some might say the Capitalism as it exists in America is “The rich get richer,  and nothing else matters…

“What happens when a society reinvests the gains from industrialization into things like healthcare, education, and so forth? Well, it’s economy changes — radically. You see, the American economy is still 75% consumption — McMansions, SUVs, designer jeans, and so forth. The problem is that 80% of Americans live paycheck to paycheck. They can’t afford those things anymore. But if America had invested in public goods, then the economy would be made less of consumption, and more of investment.

Source: How to Think About the World After Capitalism – Eudaimonia and Co

I like to blame all of our problems on #CO3 but I recognize that our “consumption” problems are ingrained in our capitalist system. The “rich get richer” and “survival of the fittest” is a dominant part of our version.

Our version of capitalism will likely change in the coming years. One path will be divorcing ourselves from the rest of the world. Going it alone. Another path is that our capitalist system may morph into the version practiced by  Western Europe, Scandinavia, and Canada as cited in the source article.

So, what is the basic difference? These countries practice what some may call social democracy.  They give all their citizens what they see as inalienable rights.  They include healthcare, education, transportation, and retirement. Because these rights are endemic in their version of capitalism they divorce themselves from the “survival of the fittest mentality”. I think we have some things to learn from them in that and many other regards.