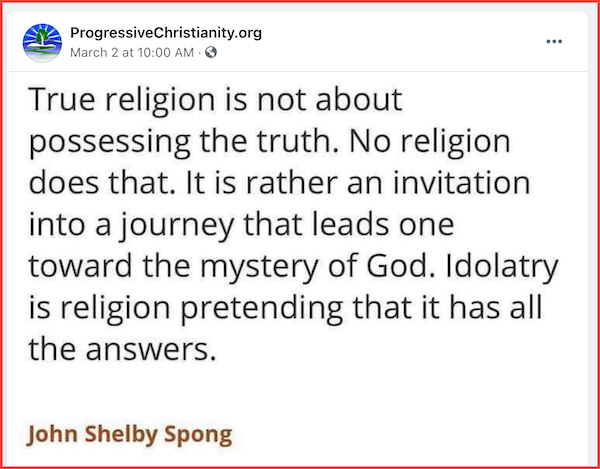 Most of my spiritual life has existed between Catholicism and Evangelical Christians, with doses of agnosticism in between. I swung in and out of these three modes for almost seventy years before I discovered my true Spiritual home.

The Catholic traditions tarnished my spirituality early on by declaring that almost all my childhood buddies, and everyone else for that matter, would not be joining me in heaven as they did not believe in the true God that I was being taught. It would be several decades after this indoctrination before they softened their stand on the inevitable damnation of the majority of humanity. By that time, I had just grown tired of the rigid structure of the Catholic Church. There was also just too much “Do as I say and don’t ask too many questions”.

When I joined an Evangelical Church just before getting married at the age of 39.66 years, I was determined not to be single on my 40th birthday. 🥴 I was in the throngs of love for the first time and just didn’t have much of a critical eye for what I was joining. My future wife wanted to get married in the church of her youth, so I was honor bound to accommodate her.

While I gained some from the Evangelical traditions, especially from the young pastor to gave us weekly marriage preparation instructions, I gradually discovered how very restrictive it felt. The Evangelical tradition is very much about “if you really care about your friends and loved ones you have to bring them into our church to assure they will be saved”. If not, they are likely destined to an eternal agony in hell.

This belief, of course naturally spurns a superiority attitude that tells me I must see non-evangelicals as inferior to me as they didn’t yet know the “truth” that I did. The more I became entangled in the church the more this attitude bothered me. I ended up questioning the validity of this version of church more strenuously than the Catholic version I had left as a youth.

This started me on a serious four-year quest for just who God was and what he wanted from me. The more I studied it the more I discovered that most versions of Christianity pretty much invent a god who agreed with their particular understanding of what it meant to be a Christian.

Because I brought this doubt up too often I was eventually told that since I questioned so much that I proclaimed to believe when I became a member that I was no longer to be considered an Evangelical. That was about ten years ago. As Jesus said I dusted my sandals off and left immediately, much to my wife’s demise.

It was at that point that I began to seriously determine if any of the 39,000+ Christian churches actually focused on the words of Jesus. That is when I came across progressive Christians.

Philip Gulley was perhaps the most influential person in my spiritual life. He is a Quaker pastor who introduced me to the idea of universal salvation. He along with Greg Boyd had the audacity to suggest that God loves each and every one of us and will eventually bring us all to Him.

My entire life has been troubled by the duality of a vengeful god of the Old Testament and the loving God of the New. When I discovered that others, much more studied than I had the same problems my spiritual life was finally settled. I have written much about both these authors/pastors here on RedLetterLiving and I will continue to do so.

Since the White Evangelical Church has all but destroyed the teaching of Jesus it is life-saving to see that others are firmly established in the love of Jesus for ALL of us. Until I grew disappointed with many versions of Christian life I did not know that progressive Christianity even existed.