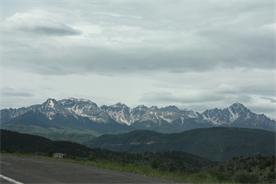 Boy did I misjudge the trip today when I was planning it yesterday. It turned out the Durango was still 110 miles away, not the 50 I estimated! And much of those 110 miles were very steep and somewhat narrow two lane roads up and down mountain sides with too many cutbacks to even remember. Instead of taking an hour as I first thought it took us almost 4 hours. But, being in the slow lane I tried not to be too impatient. We peeked out at about 11,000 feet where the temperature dropped to 36 degrees and was a  pretty heavy snowstorm. It was about 70 degrees when we started this trip!  About half way through the trip we landed in Ouray Colorado. The picture of it is above. It is a very picturesque town and had a lot of quaint stores with high quality goods.  We ended up having lunch there and bought some mementos of for out trip.

We finally ended up in Durango about 3:30PM and found our hotel for the next three days. After a rest we ventured down to the town center where they were having some sort of kids festival. They had main street blocked off for about 4 blocks. We found the train station and got a hard copy of our tickets so we are ready to go for tomorrow. I was here about 33 years ago with a buddy of mine. Of course, there is almost nothing that is the same except for the mountains; of course they never change.

We will go on our all day train ride tomorrow and then to Mese Verde National Park on Monday.