I am going to take a break from the Bible book of James to bring over a post from one of my now inactive blogs at RedLetterLiving.net . It is about another one of my heroes. This list has proven to be a cornerstone on my beliefs of non-violence and man’s humanity. 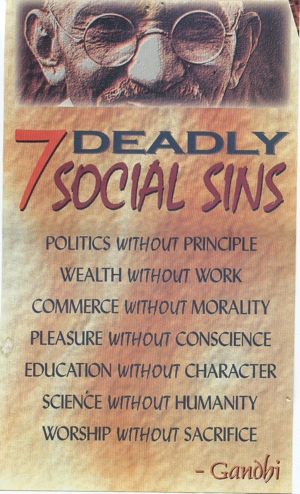 I know that Gandhi was not a Christian but many of his actions were certainly Christian in nature and principle. I found  the picture shown here under a pile on my desk. I wish it had remained on top but that was not  to be the case. Anyway, it will now reside in a reserved section of my bulletin board above my desk. Of course this is a play off of “The Seven Deadly Sins” that came out in the Christian church in the middle ages.  Here is what Wikipedia says about that:

The Seven Deadly Sins, also known as the Capital Vices or Cardinal Sins, is a classification of the most objectionable vices which has been used since early Christiantimes to educate and instruct followers concerning (immoral) fallen man’s tendency tosin. It consists of “Lust“, “Gluttony“, “Greed“, “Sloth“, “Wrath”, “Envy“, and “Pride“.

Most of us know that Martin Luther King patterned his civil rights movement  based on Gandhi’s non-violence protests. His list was at the foundation for Dr. King.

Gandhi was born a Hindu and practiced it all his life, deriving most of his principles from Hinduism. As a common Hindu, he believed all religions to be equal, and rejected all efforts to convert him to a different faith. He was an avid theologian and read extensively about all major religions.  With so much of history about different religions going to war with each other over their personal view of God it is kind of refreshing to find a religion that is not like that.  I guess I will need to put the study of Hinduism on my post seeds list too

. I remember watching the movie (Gandhi)  about him that came out about 25 years ago. It was very inspiring and helped shape much of my beliefs about nonviolence. Gandhi was indeed a very inspiring person.

Let’s always remember that other religions may have insights into God that Christianity doesn’t.  We should learn what we can from them. Maybe I am just too sensitive to these issues but I see all seven of these sins being glaringly played out around us today. The first three have been prominent in our headlines for several years now and the final four are burning just below the surface! How sad is that?….