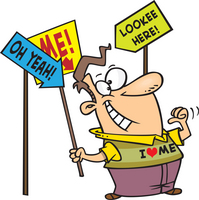 This one sentence said a lot about people in Will’s day but maybe even more so in today’s world. In a nutshell, anyone who thinks they are great aren’t!  It is as simple as that. Thinking that you are great will almost certainly assure that your greatness is in your mind only. The really great people all the way from Moses through Lincoln  and beyond never assumed they were meant for greatness.

There are several conditions that lead to thinking you are great. Some call it ego, some say it is “getting a big head”, some are just too full of themselves to see the real greatness around them. Sports jocks and entertainers seem to fall into this condition most frequently. Look at Elvis or Michael Jackson to see how they spiraled into drugs because they let people convince them they were great. I am not at all attuned to the sports world but it seems there is a fallen athlete almost every month.

Humility is, at least in my mind, a precursor to true greatness. Einstein never took himself too seriously and never lost his talent of talking with ordinary people. He enjoyed a conversation with his barber (yeah he actually had one) as much as with fellow scientists. Will Rogers, a personal hero of mine, never looked on himself as anything but a half-breed cowboy who happened to have a way with words and making others smile. Yeah, he made a lot of money, especially as it was during the Great Depression, but he never got a big head over it.

Thinking you are great versus actually being great is one of the biggest stumbling blocks in politics today.  Given the millions of dollars that need to be raised and the months if not years required in campaigning it is hard to see where a truly great humanitarian could end up or for that matter even want to be president. The only ones who seem to want to endure the pains to be president are those who think they are great. Is it even possible for truly great people to end up leadership roles in our government today?

The final area I want to talk about on this topic is religion.  There are just too many preachers and theologians in the religious community who are convinced that they are great. I spent pretty much three years of my life studying one after another seeking the great ones. There are so many of them who think they are great that they come to believe that their opinions of theological matters are the only ones that are correct. In other words, they are convinced that they alone have the true knowledge of God.  Talk about having a big head!!  Yes, there are a few who have the humility to be great but they seem to be very much the exception rather than the rule in today’s religious world. Just look at all the fallen TV evangelists the last few years to see examples of what I mean. Then there are other so called religious leaders such as Bin Laden who are nothing but fanatics dressed in religious robes. Religion is getting a bad rep lately because of  all these types of guys. We need to get back to the pure and simple words of Jesus to really know what Christianity is supposed to be about.  We should not let the theological “big heads” push us in any different direction.

Oh, by the way this saying applies to nations as well as people. “If you think you are great then you aren’t”.

But what do I know….