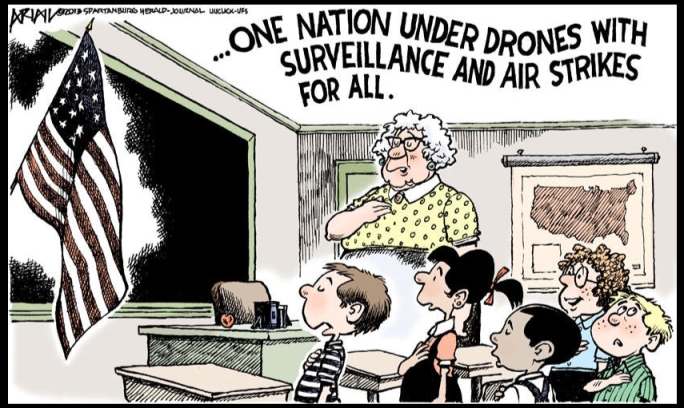 It was nice to see that Rand Paul’s standing filibuster bringing additional attention to the military drone issue in this country. Our country is based on check and balances and the current drone program has neither of those characteristics. The possibility of serious abuse scares me and should scare all of us. But, that is not what this post is going to be about. Instead it is about our pledge of allegiance and our national anthem.

I think it is time to replace both of these “sacred documents” to align us with twenty-first century thinking.  We need to get away from our obsession with wars and conflicts. As pointed out by a recent post here about Einstein’s quote about world war four being fought with stick and stones.  Our technology devoted to making war has advanced so much that we will soon be capable of annihilating ourselves many time over.  Even considering the ancient stockpile of nuclear weapons stored away in the previous Soviet Union could even do that job.

We need to start pledging to try to get along with each other and to prevent wars, not celebrate them at all our public gathering and sporting events. The “rockets red glare” just needs to go.  Most people think that our current national anthem has been the same since the war of 1812 where it was penned. In reality it was changed in 1931; a mere eighty-some years ago. In fact it has been changed a number of time over the years.

About the time the current song was made the national anthem the one I propose to replace it was being written by Woody Guthrie. His song was entitled “This land is your land”. I suspect most of you know the song so I won’t repeat it here. Woody’s song allow us to share our  pride of being an immigrant nation and our astounding geography. “This land is your land. This land is my land” has a nice ring to it.

Going on to the pledge of allegiance, no I don’t propose the above change.  The current pledge was adopted in 1942. Here is what Wikipedia says about that:

The Pledge of Allegiance was written in 1892 by Francis Bellamy (1855–1931), who was a Baptist minister, a Christian socialist, and the cousin of socialist utopian novelist Edward Bellamy (1850–1898). The original “Pledge of Allegiance” was published in the September 8 issue of the popular children’s magazine The Youth’s Companion as part of the National Public-School Celebration of Columbus Day, a celebration of the 400th anniversary of Christopher Columbus’s arrival in the Americas….

I pledge allegiance to my Flag and the Republic for which it stands, one nation indivisible, with liberty and justice for all.

The Pledge was supposed to be quick and to the point. Bellamy designed it to be recited in 15 seconds. As a socialist, he had initially also considered using the words equality and fraternity but decided against it – knowing that the state superintendents of education on his committee were against equality for women and African Americans.

I wonder if my conservative friends realize that our pledge of allegiance was written by a socialist. I can’t imagine that they do or else they would have demanded it be replaced years ago. 🙂  The words “under God” were added in 1954. The Catholic organization The Knights of Columbus promoted this change as they had been using it for several years themselves.

Maybe it is time to change both again…….