We spent today with some old-time high school friends of mine who are near-Cleveland residents.  We spent the majority of the day at the Cleveland Museum of Natural History but before that we got a thorough driving tour of the Cleveland Clinic.  The scale of the clinic is almost unimaginable.  There were at least twenty huge buildings in the complex. The Cleveland Clinic is thought to be the healthcare of the future in that they do it much more efficiently than most. All their doctors are on salary as opposed to independent practices. Surgeons don’t make money performing more surgeries; they make a salary to find and relieve healthcare problems. The entire complex is very automated and geared toward wellness instead of profits. I do believe that the Cleveland Clinic along with the Mayo Clinic will be how medicine is done when we finally get over our obsession with our current healthcare systems in this country.

The Museum of Natural History was one of the finest ones we have visited. It had a very diverse amount of different things. I seem to be a rock-hound so I spent quite a bit of time in that area and learned several different facts that I had not previously heard. Another part of the museum that fascinated me was the Mayan exhibit.  I did not realize that they had such an elaborate means of recording their history. Their hieroglyphics are very elaborate. I need to study on that some more.  The museum shop didn’t have anything on it so I will hit Amazon as soon as get home. I think I would like to be more studied on it.

One thing I learned both yesterday and today is that this is Spring break for the Cleveland area. I can’t tell you how many shin bumps I have from being hit by baby carriages in the last two days.  Maybe it is a good thing that we are childless as I just don’t seem to have much patience for all the kids running around frantically at these sort of places.

We finished up our tour of the museum with a planetarium show. It was an elaborate demonstration of the mars probe as well as showing us all the constellations in the heavens. I still think it is kind of a stretch how they name some of them. They just don’t look like lions and bears and such to me. But it was a very impressive show.  I remember hiking up to the top of a mountain in Colorado in my much younger days and see all those stars they showed us today but I has been years since I saw a sky so studded with stars. 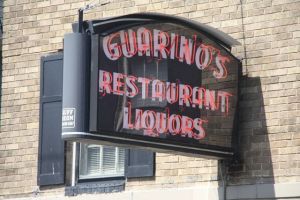 After the museum it was off to Little Italy for a late lunch at a one-hundred year old establishment and then some cannoli at a bakery of like age.  Both were fantastic.  Tomorrow will sort of be an R&R day for us. We have walked about ten miles in the last few days and need a little rest. The day will probably be spent at the Rock & Roll Hall of Fame and dinner at a place along the lake. But, of course more on that later…