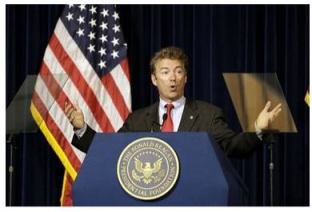 Like other Republicans who have advocated a ‘bigger-tent’ philosophy for their party, US Senator Rand Paul says this doesn’t mean leaving behind strongly held principles

As any Madison Avenue type and he will tell you it is all about marketing. In other words you must show the masses what they want or what you want them to believe; they don’t have a clue themselves.

I must admit that if you ignore much of Rand Paul’s libertarian philosophies about shutting down government he says things that I like. He is very astute in the workings of the twenty-first century media and that certainly includes the marketing aspects of it. I often love listening to the guy; he is one of the few of those yahoos in Washington who seems to have a lick of common sense.

In the interior of the quoted article above he goes on to say we don’t have to budge on our “principles”, we just need stronger marketing tools. I say the above in a semi-jest mode because he does go on to say that on many things we can just “agree to disagree” and still get along. I remember back in the 1960’s there were so many who refused to budge on their principles about their belief in the inferiority of “those negroes” (I substituted a nicer word in this quote).  They loudly proclaimed that it was a “State’s right” to handle the segregation thing. Thankfully those “principles” are now long gone, at least on the surface.  Sometimes giving up on “principles” is a good thing.

Until the Republican party look at others as being something other than the “enemy” they will continue to decline in numbers no matter how big a tent they try to put up. Things are just so bad now that I might even consider giving Mr. Rand a vote in the next presidential elections just to see what happens.  We need to do something to shake up our partisan political country. Maybe he is that thing. But in the end I am really putting most of my hopes on the emerging Centrist Party if they can only get a significant following.