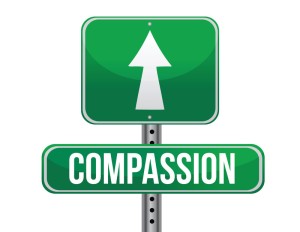 I admit I have only been keeping half an eye open of all this garbage going on with the shut-down and default threats  made by the Republicans in congress. One thing I have been watching is to see if there is any compassion being shown by any of those folks there from the GOP and quite frankly I have found almost nothing there that resembles compassion in any of their actions and words.  I wonder if this is typical of their base and those who consistently vote to return them to office?

As a matter of fact I find mostly the exact opposite of compassion from many of their leader and in particular Senator Cruz. That guy just seems to be filled to the very top of his brain, if he actually has one, with hate.  There is no other way to explain all the vitriol comments that constantly come out of his mouth.  He simply hates the president and most others outside his wing of the GOP. It was reported that he even was ranting at the president during the private meeting with a few other members of the GOP.

Now don’t get me wrong, I certainly applaud some of the GOP’s efforts to rein in our never-ending deficit spending. We certainly need to accomplish that. But even there the first thing they want to exclude from budget cuts is the primary waster of our tax dollars and that is our military complex. Instead of wanting to get rid of all the military spending related to the Cold War and “evil empires” they want to take it away from the most vulnerable of our population.  They want and voted for severe cuts to food stamp, Medicaid and such.  If they were given their way I’m quite sure they would gut Medicare and Social Security as well.

They rail on and on about the evils of the Affordable Care Act but they give nothing to replace it. It seems they are quite happy to lock more than 30 million of our citizens out of affordable healthcare.  They seem more than pleased to see people who are presently ill from getting any kind of insurance because of pre-existing conditions.

I really wish I could find even an iota of compassion in any of their words but I can’t. Those in their party that are troubled by this turn away from compassion are like a deer-in-the-headlights. They just seem to be stricken with fear of those who have hijacked the party of Lincoln.

Is this the new face of the Republican party that those outside of the beltway want us to see? I just don’t know? If it is then I need to get down on my knees much more often to pray that this new GOP goes down in flames before they take the whole country with them….