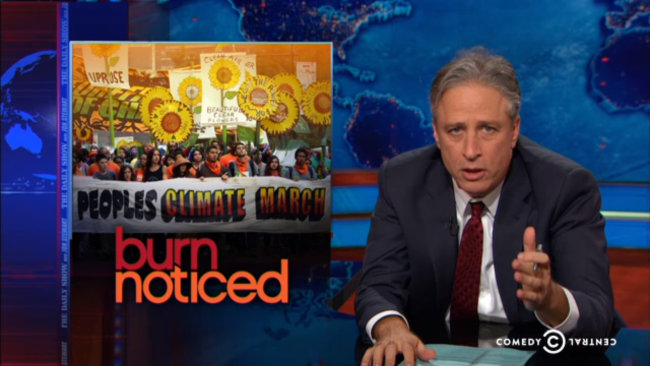 Yes, 99.9% of the scientific literature shows that climate change is real and worsened by the things we do every day, like driving cars and burning fossil fuels. Yet political representatives who continue to deny that very real science continue to serve on government science committees.

“If scientists could be bought,” said Stewart, “these companies would have already made it rain in nerd town.”

He told the story of a cancer patient who was recently forced to pay $13,700 up front for a drug transfusion which was only part of a much bigger $83,000 payment. Yet the transfusion, says Brill, cost the pharmaceutical company just $300.

Brill said the reason health care will never work as a free market is simple: “The cost has shifted to the taxpayers — which I think is a good thing. But it’s outrageous that we haven’t done anything to control those costs.”

Then, Stewart brilliantly came back at Brill with a common conservative argument: If we simply create a free market for health care where patients can pick-and-choose their coverage, it will result competition and, therefore, better options.

Here’s Brill’s response: “Everyone says, ‘Well it’s a marketplace.’ That guy [the cancer patient] has no choice in buying that drug. His doctor told him, ‘This will save your life. You don’t take it, you’re gonna die.'”

I know this is a big quote above and leaves little of my self-imposed 500 word post limit for my take but it does kind of speak for itself so maybe my 200 words is more than enough. Jon Stewart is an off-the-wall guy who says what we all would want to say if we had his audience. Well, almost all of us. Some of my more conservative friends probably hate him as they sadly do so many others…