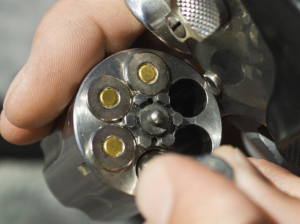 Ammunition degrades because the gunpower inside of it does not last forever in the compressed state that it lives….

For most people, the decline in accuracy is mitigated somewhat by the fact that they never use their firearms for self-defense purposes. But it really can be a problem in the long-run. And that’s why ammo manufacturers are even more profitable than gun manufacturers.

If you have read anything here you know that I am not a gun fan. I do believe that the second amendment was necessary 250 years ago because local militias were the standard for our country so we needed to make sure that people could supply their own guns.  The only militias around today are like those nuts in Oregon who want to shut down government, not protect it. The second amendment has simply outlived its time, kind of like saying a person of color is only 2/5 of a citizen. Neither apply in today’s society if they ever did in the past.

I personally know how addictive smoking is. It took me years to finally get up the courage to quit. I think guns are pretty much the same thing. The the power of guns are addictive; when you own a gun you hold the power to easily take away a life, especially the “bad” guys (but who are the bad guys varies depending on your attitude). Our addiction to guns is fed to us at a very early age. Well over half the video games sold today involve using guns. There are so many show on TV that show taking a life is just an ordinary thing.

I didn’t realize that bullets got old and needed to be regularly replaced.  The idea of bullets are the food for guns is a creative way to attack our obsession for these weapons of destruction. I like the idea of restricting ammunition purchases  as cited in the article but I would attack the problem from a different angle.

Let’s treat bullets the same as we do cigarettes:

I know it took years to go from almost half of us smoking to now where less than 17% of us do but it has eventually happened. Only the most excessively addicted still smoke.

I know it will be impossible to take away guns in any near term but we can, like cigarettes, eventually make people realize just how damaging  and costly they are to our society….