I am going to get a little personal and a lot philosophical with this post . It is about the state of marriage and my personal experiences with it.

END_OF_DOCUMENT_TOKEN_TO_BE_REPLACED

This is a continuation of yesterday’s post about a divorce between Red America and Blue America. This time I will start putting forward my rather warped view of how that might happen.  If you missed yesterday’s post that started this discussion I would recommend that you click the “Home” button at the top of this page and see the post from yesterday directly below this one. Now on to the matter at hand.

Our flag is just too tattered to even recognize it any more. It might be time to go our separate ways but how do we divide up what we currently have? The divide between Red America and Blue America has always been there but it has become a deep abyss in the last almost forty years.  I could start this divorce with in November 2016 but that would not really represent anywhere close to reality. That year was the result of laziness of Blue America to put their voices forward. It allowed Red State America to push forward their extreme candidate.

Now I realize that no State except maybe for Texas (those people are beyond description) is all Red or Blue so there will have to be some migration as a result of this divorce.  You could say we all will be the children of divorce.  Since it doesn’t seem possible to move between our Red and Blue parents we gotta find another way.  For a solution you gotta start somewhere and I propose to do that with the 2012 electoral map.

Looking at the map some things pop up. The northeast and west seem pretty blue so that is probably the core for Blue America. But in order to make a country viable it needs to be connected. To do that means that Indiana, Montana, North Dakota and Arizona will have to give up some land. The question is how much?  Part of the answer is apportioning by population and that is where the next map comes in.  It l 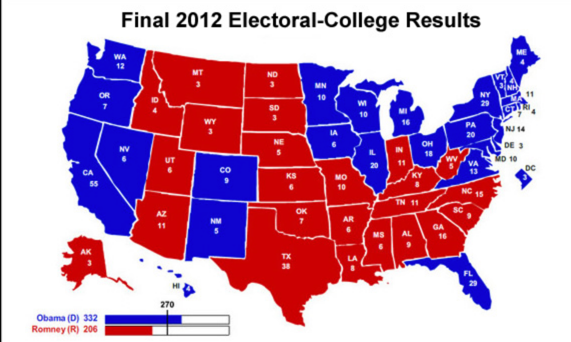 ooks strange because the map is proportioned by population of each State.

Looking at this population map there just aren’t many people in North Dakota or Montana.  Maybe we could give all those folks who don’t want to be part of Blue America a million bucks each to migrate south and just move those States from Red to Blue? Since the northern part of Indiana is pretty much blue I think we could work out a 30-70 split without a lot of work. I don’t mean to totally ignore the fact that Idaho is in play with a small strip but since no one likely lives in that sliver of Idaho no one would even notice that it switched from red to blue. 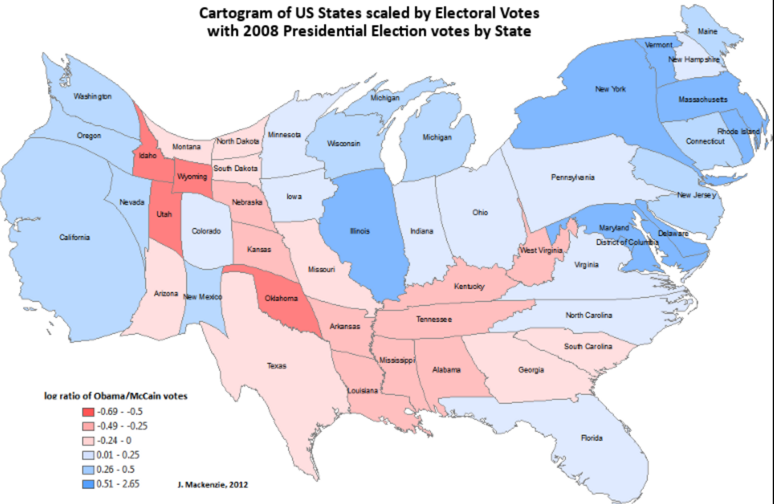 Arizona and Utah need to turn blue too so let’s swap those two States for Florida. Population wise the trade would benefit the Red States  so they just might buy into it. Now with all this initial swapping done what would  Red America and Blue America look like? I will hold off on showing you that until the next post in this series early next week.

If you want to chime in on all this silliness put in your two cents now or forever hold your peace. 🙂 I never said that my view of the world was a totally sane one. 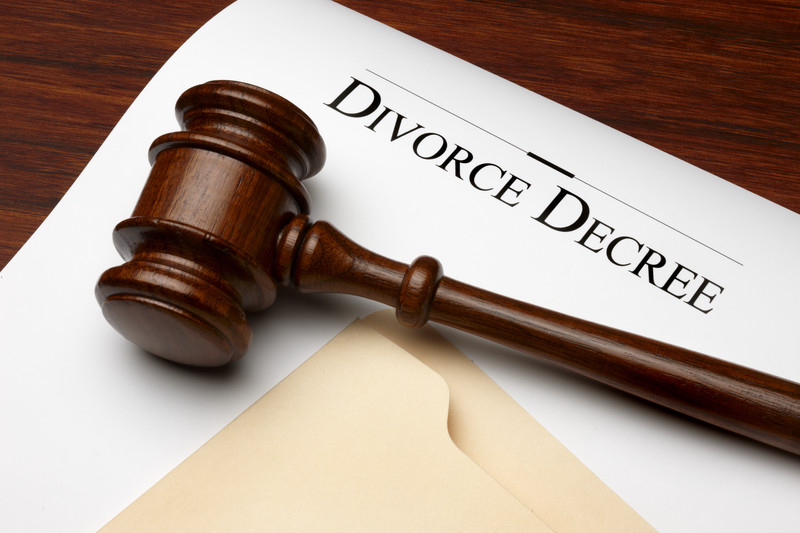 I imagine the title at got a few of you to click it.  No, although I have sometimes thought about it, it is not about me divorcing my wife of 32 years. I kinda think it is time to start thinking about a divorce between Red and Blue America for irreconcilable differences. I am just not sure if we’ll ever listen to each other anymore let alone come to any agreement on compromise. Our flag is becoming too tattered to even recognize anymore. Its time for a change.

It’s time to start getting ready to go our separate ways and that is what this series of posts is all about. Before I get to a how we do this let’s talk a little about how we got here:

Red America’s solution to everything seems to be to take us back to the States. We tried that solution over two hundred years ago. It was called “The Confederation of American States” where each state was actually almost a separate country with their own laws and regulations. The early founders discovered that type of rule totally unworkable. Red America’ mantra is survival of the fittest. They believe those who accumulate wealth have no more responsibility toward society than those who have nothing.  These  Red America beliefs are very foreign to those in Blue America.

Blue America desperately want healthcare for all, much the same as the rest of the 1st world countries. They think that government, yes even the federal government, is to do the people’s business.  It is to make sure that we all have the same opportunities in life. To do that educational opportunities must be available to all. They think that  we are all in this together and each shares responsibility for the other. Blue America is definitely a brother’s keeper place. The Blue America beliefs contain WAY too much empathy for Red America.

I think we can point to one particular point in history where the abyss between Red and Blue America started and that is in the early 1980s. It is when Ronald Reagan flatly said that government is not a solution to our problems but instead the main reason for them. That started the ultra conservative fringe in America and has increased dramatically since then. Now the abyss in almost bottomless. No one seems to be able to see across it anymore.

Flash forward to today where we have a president that no one could even imagine thirty years ago. He is the epitome of “self-centered”. Nothing matters to him if it doesn’t directly benefit him.  He viciously trashes anyone who dares to criticize anything he says or does.  It seems that RedAmerica loves this guy while Blue America despises him.

It’s time for a divorce due to irreconcilable differences.  Next time I will start giving you  my solution to a successful divorce between Red America and Blue America.