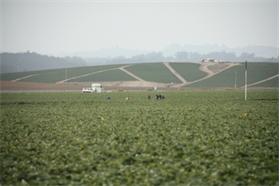 We started our day with a quick stroll back to Fisherman’s Wharf to see the Aquarium there.  Quick that is considering all the walking we did yesterday (ha).  The aquarium was outstanding.  The first picture above was of some Luner Jellyfish. They looked unreal but they were indeed real.  We then walked through over 100 feet of clear tubes where the SF Bay water was all around us.  It was amazing all the different types of fish and such that they collected there.

After the aquarium we checked out of our hotel and headed south to Salinas. That is where most of the countries veggies are now grown. That is those not being now imported. We first ran across about 20,000 acres of artichokes.  There were just huge huge fields of them in various stages of development. Following that was lettuce, brussel sprouts, and a couple of fields we couldn’t identify.  We also make a stop at a cherry stand in Gilroy California.  Some of you may know that Gilroy supplies over 90% of all the Garlic consumed in the U.S. !  We bought some cherries and asked the young lady there where the fields of garlic are. Of course being a local she didn’t know 🙂 .  We looked around some but didn’t find them. Maybe they are planning on having a garlic shortage this year.

Anyway with all the veggie sighting under our belt we decided to make our official turn around on our vacation and start heading home.  We got back to  west of San Jose about 5:30PM; just in time for the Silicon Valley rush hour.  And believe me when I say I don’t understand why they call it rush hour when all we did was creep along with 12 other lanes of traffic.  We ended up stopping at a Denny’s resturant for about an hour to let it subside some.  It did reduce some but was still very heavy even at 7PM. I will do an overall thoughts of California tomorrow and will discuss this more then.  We decided to try and get around Sacramento and therefore most of the rush hour traffic tonight instead of facing another traffic jam tomorrow.  So, as a result we landed in our hotel around 9:30PM.  Tomorrow will be mainly a travel day to Salt Lake City.