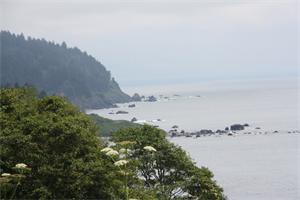 Here is my synopsis of California as I promised yesterday.  California is indeed a very beautiful State and the weather is great.  The great redwoods in the northern part of the State are awesome along with mile after mile of pristine shoreline.

But I think just way too many people have  “discovered” California.  30 million people; wow! After seeing the local news for almost 4 days I have come to a couple of conclusions:  They can’t see the forest for the trees; even those in the northern part of the State 🙂 .  They seem to want to vote on just about everything. In that respect it is quite impossible to have any overall plans or objectives for the State.  The California government is in an impossible situation because of such short sightnedness. The voters want it all but don’t want to have to pay for it. They micromanage everything thing including their 9.25% sales tax with a complicated number of exemptions.

The other thing I noticed is that for some reason they all seem to think that the speed limit signs must be “average” speed. They spend hours and hours every week in traffic jams  and then go 100 mph to make up for the creeping.  And they are probably the least courteous bunch on the highways that I have ever encountered and I have been in the NYC and Boston traffic! If you come here don’t dare use your turn signals to show a lane change; you are just asking to be cut off.  And “keep right except to pass”; forget it; it doesn’t exist. Their road signs in a word suck.  If you don’t know that xyz “street” is actually a highway that  goes to a particular city then you are certain to get lost because they never show you that.

But, when Californians get out of their beloved cars they are a friendly enough bunch. We struck up conversations with several of them during our stay there. Mostly to ask for directions . That was Yvonne asking not me of course 🙂 .  The final mention on this topic is that they have a great  mass transit system around San Francisco but almost no one has “discovered” it yet I guess. So, overall, California is a great place with WAY WAY too many people who WAY WAY love their cars TOO TOO much. One thing that could help most of the above problems would be for a very brave governor and legislature to add a $3/gallon gasoline tax. But of course no one is that brave in California.

PS………  One thing I forgot to note on this post was the ethnic diversity of California. Around San Francisco there are people from all around the world.  Part of that is due to being close to Stanford, CalTech, and the other high profile schools. There is also a very high percentage of Hispanic origin even in northern California. It was not unusual to be someplace as a white Anglo and be in the minority. That almost never happens to us in the Midwest. At lease for those living outside the major cities.  It would be nice to have that kind of diversity where we live.

Even in northern California the housing prices are simply sky high. A small shack of 700 square feet costs about $500,000.  How can lower class and lower middle class even live here? I suspect the average monthly mortgage is over $2500 per month. The cost of everything seems to be higher (for instance a hamburger outside the fast food places is typically $8.50) but housing, even after the bust, is out of reach. The final post observation is that I was surprised at how the average towns seem to mimic those of  Mexico in there makeup and appearance.  I know that of the Hispanic origins but I was just surprised how strong it still is.