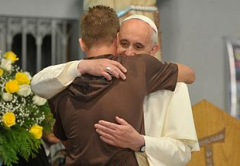 Pope Francis, laying out his hopes Wednesday for the just-begun year, urged people to work for a world where everyone accepts each other’s differences and where enemies recognize that they are brothers.

I want to end this first month of the new year 2014 with some inspiring words from the new pope of the Catholic church.He has the courage to speak out on so many issues that other fear to embrace. I admire him much for that.

These handful of sentences pretty much sums up one of my life’s primary purposes. I know I am just a simple-living senior citizen but even my contributions to the world mean something. I blog here and especially over at Red Letter Living hoping to convince just a few of you who might be acting otherwise that diversity is a good thing and loving each other is the main thing God expects of us. Why do we seem to gravitate toward the opposite feelings?

Pope Francis continues to pluck my heartstrings with his words.  I can’t imagine a better religious figure for our times. I pray that some of his hope rubs out some of my doubt about the world.