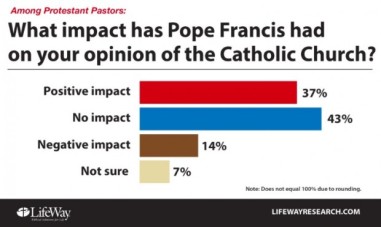 While 80 percent of mainline Protestant pastors see Pope Francis as a true Christian, only 58 percent of evangelical preachers agree.

Source: Do Pastors Trust Pope Francis on Theology? New Survey Reveals How Preachers Responded When Asked if the Pontiff Is a True Christian | TheBlaze.com

I am going to use the polling above as an example for this post but not its focus.  There just seems to be about 25% of the population on the extreme right fringes in the U.S. that are pretty much distrustful of everything and everyone else. It seems that they almost hate the other 75%.  Maybe they are just so stricken with fear that everyone is suspect of something they deem bad. They hate the change that is happening around them daily, especially when more potential adversaries are allowed to invade “their” country. I wonder just how many of this 25% are the same people in all the various scenarios? I imagine that the core is pretty high.

In poll shown above from evangelical pastors about 25% of them don’t think the Pope is a genuine Christian. They view him as either the anti-Christ or hopefully something a little less hateful. I know that there are several christian denominations who despise the leader of the Catholic church no matter who he is. I’m sure a large part of this negative response is from those particular groups.

What can we do to help this 25% of our population get over their fear of change and  almost everything else? That seems to be the fundamental question at hand.

This is a serious list of issues that plague too many in our country and will likely take years to even begin to improve. Until that time it is up to the rest of us to not allow this relatively small minority to take us down with their negative beliefs.  We need to understand and even empathize with their fears no matter how unreal they are but not be overcome by them.

I am That Wise Guy