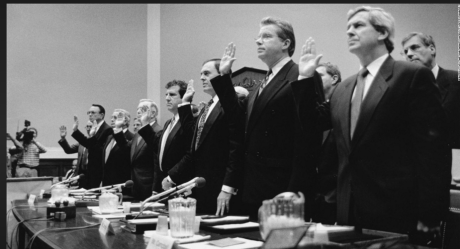 I still remember the words in this blog’s title coming from each of the cigarette company CEOs while testifying before a congressional committee in 1994.  They all stood up and swore that cigarettes addiction was a fallacy.   About that time I had been free from cigarettes for about two years after 25 years of use.  Breaking that addiction was one of the hardest things I have ever had to do.  To hear those seven guys tell me that lie shocked me but it wouldn’t by any means be the last time that happened

As Yoggi Berra used to say “its daja vu all over again” today when I listen to all those people around Mr. Trump say they have never heard him lie I think I am living in an alternative universe. We somehow went back 23 years in time! Maybe all those seven CEOs now work in the White House?

But then again it also reminded me that even though it seems worse, things are not that much different than they were then.

The GOP continues to be a party for the rich and they are willing to toss everyone else aside because the rich are the true capitalists who make this country great. Or maybe it is  that we need to give them more money so they can spend it and it therefore flows, or should I say trickles, down to the rest of us. We just never seem to be able to get some sane people into our nation’s capital, especially in the Republican party.

One thing that has changed is the the Democratic party seems to no longer be for the working class guy but instead is now a champion for those along the fringes of society.

It is being said that with all the gridlock in our nation’s capital that all it would take is the election of six Independent senators and they could pretty much decide the direction of pretty much all legislation.  Maybe, like Britain it is time for a strong third party in the USA.  I would likely even contribute to one of them even if my state of Indiana would never have the guts to elect one.