For the last hundred years or more the average person went to work for a given number of hours and then went home to his family. He was paid for his efforts and used that money to provide food and shelter. The number of hours demanded for a day’s work has varied over the years but the idea of working for someone else has remained a constant. We tend to think that this is a normal kind of thing. But for many in history that was really not the case.

The ancient ruins here at Mesa Verde got me to thinking about this. Native Americans for the most part don’t buy into the 9 til 5 mentality now nor have they ever. At first, 500AD, the native Americans around here were hunter/gatherers. They have unearthed numbers pit houses where they lived. They later, 1200AD, became cliff dwellers and usual grew crops above their homes. How they managed to live in such arid conditions is still beyond me. There are no major sources of water in the area so even gathering water had to have been a chore for them. It is reported they they dammed up gullies to gather the water from the melting snow and also got some water through cracks in the sandstone walls.  About 1300AD they simply left and went south. A severe drought is postulated as being the cause.

We will be eating dinner tonight at the Metate Room here at the lodge. It has a world famous chef with world famous prices so we reserved only one night for enjoying the cuisine there. Tomorrow will be our last day here and then it is on to Monument Valley in Utah and then back to Denver. From there who knows? I will give you a synopsis post about our stay here at Mesa Verde.  Most of it has been good, maybe even great, but there is room for improvements that I will also mention.

Here are the pictures for today:

Here is a picture of the Cliff Palace. It is probably the best known one here. I plan on going back there during the late afternoon hour to get some more pictures when the sun is giving its best performance.

Here is a picture of me and my new Chevy Sonic. She has been doing very well for us on this trip. Even though she is a sub-compact she still has more than enough room for even my wife’s things. Of course we brought twice as much as we actually needed 🙂 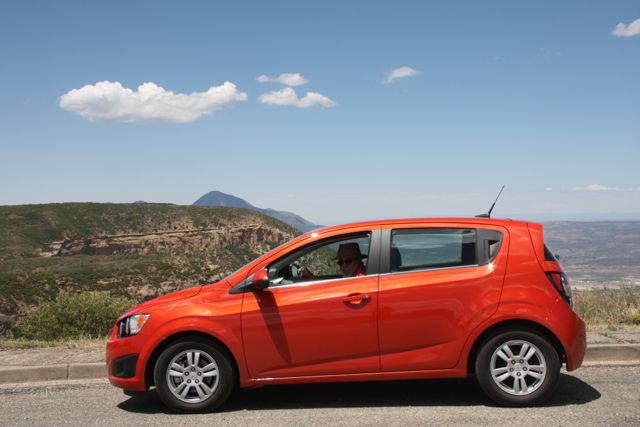