After more than a year of this stuff I am utterly tired of the statement in the title of this post! I am tired of people around the president trying to calm the effects of the latest bomb Mr. Trump seems to launch almost daily. 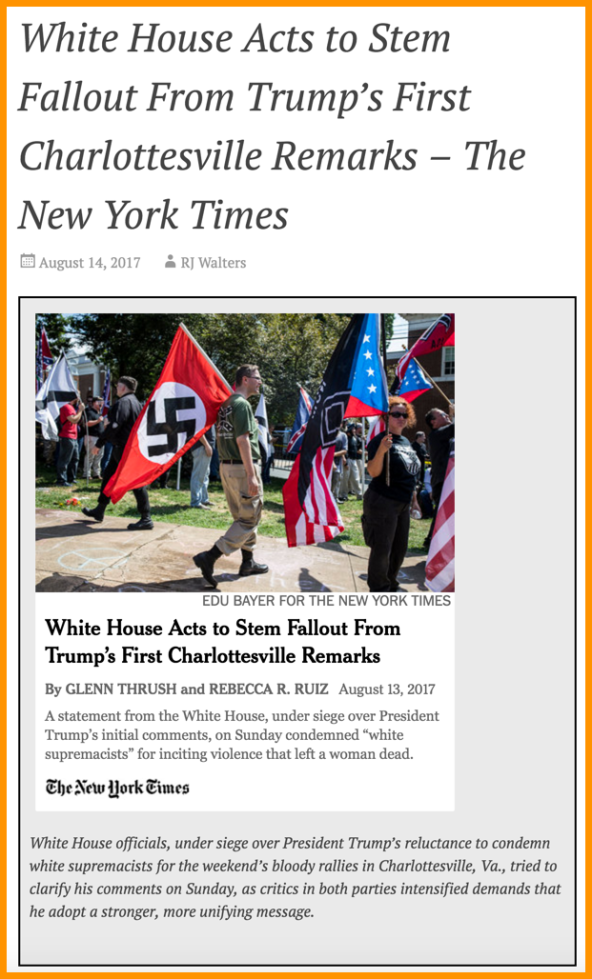 Yes, I recognize that without the white supremacists vote he would likely not be president. I recognize that it is an important part of his base that he doesn’t want to offend since there is a slight chance that he may need them again. But even with his massive ego he needs to realize that his base made up of a WILDLY hodgepodge groups of voters has no chance of staying intact for another go around.

I’m sure the Evangelicals, who are likely the major source of his base, utterly refuse to believe that they are cohorts with neo-Nazis, the KKK and other white supremacists. Or maybe I just pray that they don’t openly endorse an alliance with other folks who helped put their choice in office.

I see the Sunday talk shows were full of White House folks who were trying to explain what Mr. Trump really meant. That veil is wearing extremely thin especially since he never acknowledges their efforts as being truthful. Why can’t he come out and say that those who live in hatred every minute of their lives are NOT worthy of any endorsement? Why is he so afraid of losing their support?

The only encouraging thing that came out of this behavior is that the senators and congressmen in his own party are  finally growing a backbone and beginning to call him out on all the outrages he spews in 140 characters or less. The only hope for us short of imminent impeachment is that the GOP finally holds him accountable for his words and actions.